Julian Assange announced that they would be releasing new documents every week until the Election and beyond. This data dump is massive!

While WikiLeaks has yet to release the promised “October Surprise” that could lead to Hillary’s prosecution, the hacking organization did release a document file that reveals a suspicious corporate firm in Paris, France, a firm that is linked to both ISIS and Hillary Clinton.

The firm is called Lafarge, and it is reported that Lafarge has been profited from funding ISIS.

The documents indicate that Lafarge wanted to run a cement plant in Syria, so they paid “taxes” to ISIS, and even bought oil from them, for many years.

Twitter has been abuzz about Hillary’s connection to the firm for a couple of months. Now the details are coming together.

According to Wikileaks, Hillary not only took cash from ISIS, but she was also the director of the French company L… pic.twitter.com/9jD8UOTWO1

Hillary has worked with Larfarge for many years. She sat on the Board of Directors as far back as the 1980’s. She helped grow the firm for decades.

Lafarge’s Executive VP for Operations, Eric Olson, was a featured attendee at the annual meeting of the 2013 Clinton Global Initiative. 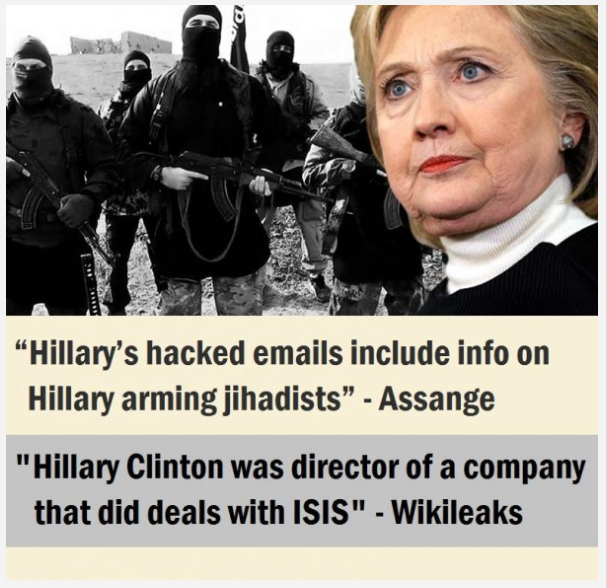 Lafarge has ties in Iraq and was once connected to Saddam Hussein. Reportedly, Hillary insisted that Lagarge invest in oil in the early 2000’s, and the firm started purchasing oil from less-than-savory rebel organizations. This example, along with the aforementioned cement business, are just two ways out of many that Lafarge funded groups like ISIS.

Consider this again: Hillary sat on the Board of a firm that has funded ISIS in multiple ways. WikiLeaks documents provide the proof.

Is Trump crazy for saying that Hillary is a co-founder of ISIS?

Not if you believe the documents that WikiLeaks has uncovered.