VIA| During President Trump’s campaign, he promised Americans that he would begin construction on a “big beautiful wall” to keep a flood of illegals out of our country. Of course, the left started to throw one heck of a temper tantrum over the last year, doing their best to stop the construction of the wall claiming that it was racist and bigoted. So, for the last several months these liberal politicians have stood in the way of Trump securing our borders by blocking any potential budgets that would be used to build a southern wall, but that has not stopped our president.

Despite the left’s objections and constant annoying protests, Trump announced that construction would begin on the wall which has angered liberals across the nation.

Over this past weekend, there was a lot of commotion between the gun-grabbers protesting for stricter gun laws and liberal politicians pushing back against President Trump and his plans to secure our nation’s borders. Despite all the chaos and negative publicity, Trump kept his eye on the prize announcing that this week would be the week that construction on the wall would finally begin, and it is about time.

Now, last week it seemed that the dream for our southern border to be secured was not about to happen, but Trump is a man of his word. On Friday, President Trump tweeted that construction of his promised southern border wall would start “immediately” after signing the omnibus spending bill, which included $1.6 billion in funding for the wall.

“We’re going to be starting work literally on Monday,” President Trump said during a weekend event at the White House. “We have a lot of money coming to the border.”
Now what really shocked libs is when Trump tweeted that he will use funds just allocated for the military to build the wall. Trump said that since the wall is part of national defense, that part of the over $700 billion in funding for the military that was in the omnibus bill will be used for the wall. Trump will pull the $18-25 billion for the wall from military funds!

Because of the $700 & $716 Billion Dollars gotten to rebuild our Military, many jobs are created and our Military is again rich. Building a great Border Wall, with drugs (poison) and enemy combatants pouring into our Country, is all about National Defense. Build WALL through M!

‘President Trump hinted over the weekend that newly-approved funding for the military could be used for building the wall along the Mexican border. White House Deputy Press Secretary Hogan Gidley said Monday he did not want to comment, citing a possible future announcement by the president on allocating the money.’ 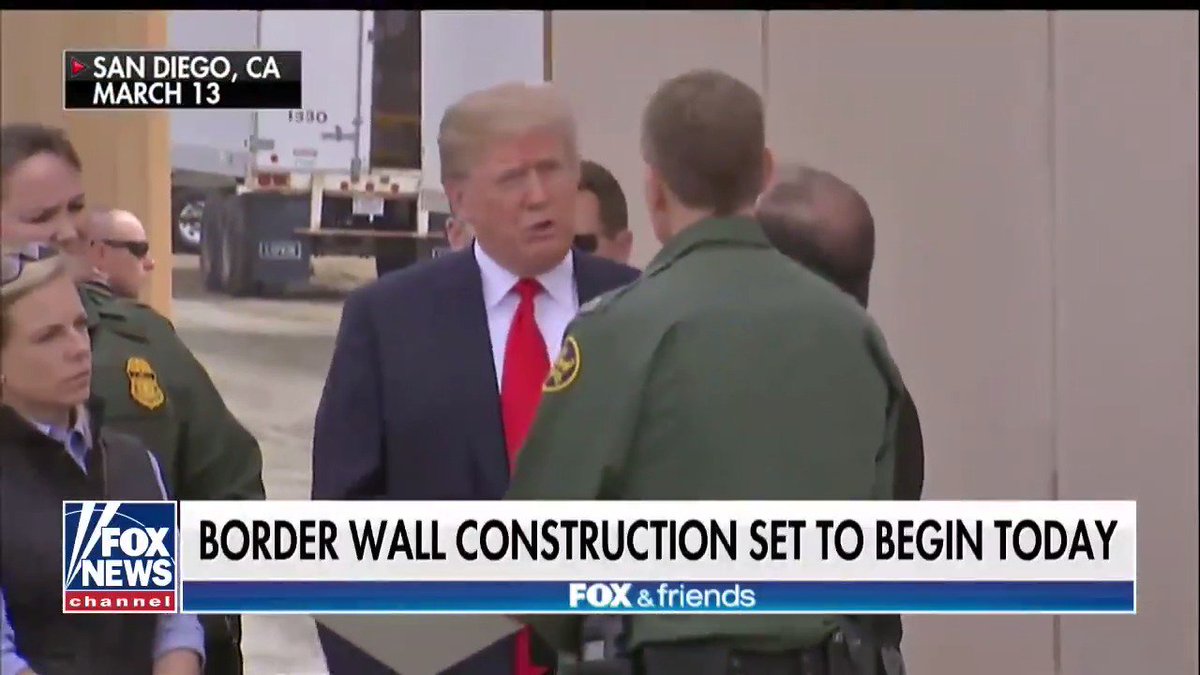 Your psychotic breakdowns have NO IMPACT on @realDonaldTrump decisions

You EMBARRASS yourselves and fuel #Trump‘s enemies

So YOU either need to #TrustTrump or just STAY GONEpic.twitter.com/7wyNIRoQwJ#MAGA #QAnon #TheFive #Hannity

Genius!!!! Libs will Freak when they realize Trump pulled the rug out from under them & got ALL the money for the wall despite their best efforts to thwart him!!! 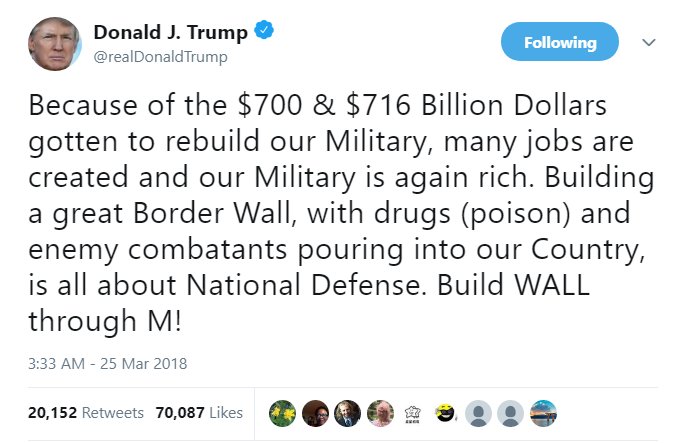 Did anyone else catch President Trump’s tweet about using part of the huge military budget — which is dedicated to National Defense — to build the wall?

Here is more from The Western Journal:

“Despite receiving only a small fraction of the $25 billion he wanted for construction of a border wall between the U.S. and Mexico, President Donald Trump recently announced the project will begin within days.

During a hastily coordinated news conference Friday, he confirmed his intention to support a $1.3 trillion omnibus bill funding the nation’s government until September — despite the fact that it included just $1.6 billion for border fencing and repair.

As the Washington Examiner reported, Trump said work on the wall would begin “literally on Monday,” adding that there will be “a lot of money coming to the border.”

The decision to support the spending legislation followed a period of vacillation on the issue. After the White House expressed Trump’s intention to sign the bill earlier in the week, he tweeted Friday morning — just hours before a federal government shutdown was set to go into effect — that he was considering a presidential veto.

I am considering a VETO of the Omnibus Spending Bill based on the fact that the 800,000 plus DACA recipients have been totally abandoned by the Democrats (not even mentioned in Bill) and the BORDER WALL, which is desperately needed for our National Defense, is not fully funded.

“I am considering a VETO of the Omnibus Spending Bill based on the fact that the 800,000 plus DACA recipients have been totally abandoned by the Democrats (not even mentioned in Bill) and the BORDER WALL, which is desperately needed for our National Defense, is not fully funded,” he wrote.

Days earlier, he tweeted a more supportive take on the funding, citing “$1.6 Billion to start Wall on Southern Border” and indicating that the “rest will be forthcoming.”

Trump heralded increased military spending in the bill as the main reason to support the measure.

In his comments Friday, however, he made it clear he was “not happy with the $1.6 billion for the wall.”

Trump went on to suggest that the earmarked spending will be used for the construction of “some new wall” in addition to “fixing existing walls and existing fences,” though the bill he signed into law reportedly precludes such construction. According to NBC News, wall construction received no funding in the omnibus bill.

As written, the money can be used to build and repair fencing that has already been approved and $38 million is set aside for preliminary work including wall design.

Trump called the funding an “initial down payment” on his campaign promise of building a wall along America’s southern border. During the 2016 presidential campaign, he frequently assured supporters that Mexico would foot the bill for its construction.

Earlier this year, he indicated that he still believes Mexico will “indirectly” pay for the wall through renegotiated trade agreements, as reported by CNBC.

“We make a good deal on NAFTA, and, say, I’m going to take a small percentage of that money and it’s going toward the wall,” he said. “Guess what? Mexico’s paying.”

President Trump has said that construction on the wall will begin on Monday despite the left’s claims it won’t happen.

If one thing is for sure, President Trump is a man of his word, and if he says that a wall will begin to be built, it will be created. The left, of course, will continue to stand in the way and do what they can to stop it since they know that once the construction of this wall begins they will lose voters for the next election which is why the left is throwing such a temper tantrum.