Dramatic footage has emerged out of Kruger National Park in South Africa showing a battle between a Rock Python and two Leopards. The video shows a cub reaching out to grab the snake just as the powerful snake strikes back.

The cub’s mother then tries to dislodge the snake from a hole in the ground resulting in her getting bitten.  The nonvenomous African rock python kills its prey by constriction and eats animals up to the size of antelope and crocodiles.

According to the video uploader, the leopard eventually killed the snake and fed on its carcass. ‘Kind of comical but also incredibly intriguing to see a real live lesson in surviving the dangers in the bush,’ uploader exRanger7 wrote online.

‘Our guide Khimbini, one of the best we have used, commented that the leopard was killing an endangered animal in the form of the Python,’ she added.  The video uploader said: ‘While on safari in South Africa we witnessed a rare and unusual event.

‘The morning started out with a bang – finding a female leopard (Metsi) in a tree, one of my favorite sightings.  ‘After a short while she climbed out of the tree and climbed upon a termite mound and began calling.


‘Soon her cub came out of the brush to join her for a little bonding and motherly love. ‘However, before long the cub was off exploring again and noticed something in the bush and curiously approached to see what it was. 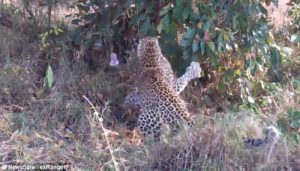 Previous GENIUS: Trump Lays Out Trap To Catch Illegals Currently Hiding Out In Sanctuary Cities, Here Is What We Know