A new statue of President Trump stands 65-feet tall and depicts the 45th president as a war hammer god emperor.

The statue shows the president, donned in ancient Roman armor, holding a massive sword with the Twitter logo engraved upon it and the head of Vladimir Putin on his shoulder, whispering into Trump’s ear.

The statue is made out of paper-mâché and is part of a parade rampaging through the Italian town of Viareggio as they celebrate Carnival this February.

The statue is quite detailed and very massive. It shows Trump dressed in flamboyant, gold armor, with a frilly gold leaf crown. In one hand he holds the Twitter-logo-embossed sword and in the other is a massive talon-handed claw. 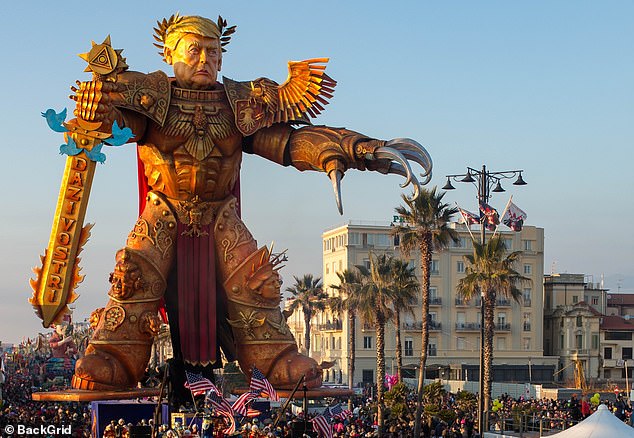 The paper statue has marched through the Italian streets several times and will continue to do so for the next week as part of the Carnevale Di Viareggio festival in the town in Tuscany.


The creator of the Trump statue has named it “Master Drone” which translates from “Il Pa-Drone” in Italian. The sculpture is crafted from paper and glue and was inspired by the Warhammer 40K figurine game and modeled after The Emperor of Mankind character.

Engraved on the blade of the sword are two words, “dazi vostri,” which means “your taxes” or “your duties.” 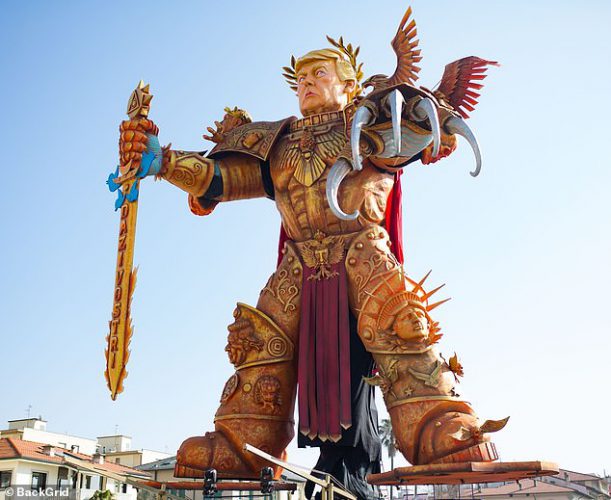 Although the phrase has a lot of potential meaning when it comes to President Trump’s foreign policy and trade war, Italians say the phrase is also a play on words with a slang saying that means, “none of your business” or “not your problem.”

On the website for the parade, the statue is described as “God Emperor Trump” and made references to the Warhammer game. Sculptor Fabrizio Galli was responsible for bringing this image of Trump into reality. He claims that the sculpture was a way for him to mock the president and criticize Trump’s foreign policy.

However, many Trump supporters in the United States have failed to understand Galli’s mocking meaning. They sometimes share memes with the president calling him “the God Emperor of the United States.” 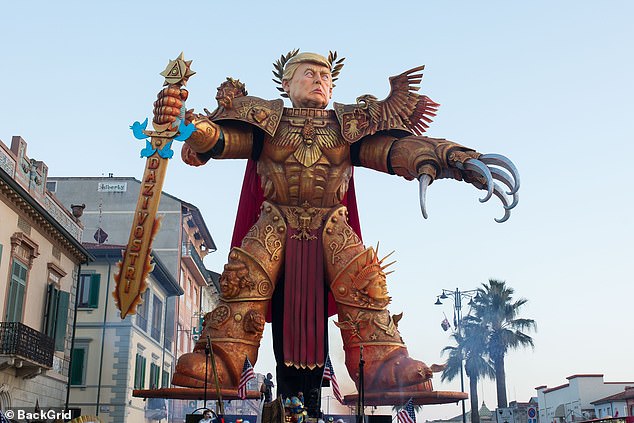 Its full description reads: “The supreme myth of having power over the whole universe. The first God Emperor Trump. The parallelism with the dominant character of Warhammer 40K has never been more fitting, except that this is not a futuristic three-dimensional tabletop wargame but pure reality. The dominant male par-excellence has arrived, democratically, and is now here, among us. The Master-Drone flies over the Viareggio boardwalk as we prepare to pay the price.”

Galli uses his art to make political statements. Trump is not the only political leader who has been on the receiving end of his work. He has also mocked Russian despot Vladimir Putin and North Korean dictator Kim Jong-un. 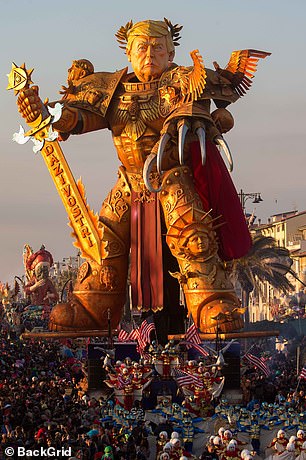 Galli told an Italian TV station, “It’s a joke, but in fact, he’s trying to destroy nations with the economy instead of nuclear missiles. This is one of the strongest actions, let’s say, that powerful people like Trump can use.”

Next Homeowner Finds Snake In Yard, Immediately Calls 911 After Seeing What's In It's Mouth