A Massachusetts woman posted a tweet calling for the assassination of  Donald Trump.

This is a slightly older article, but it still illustrates the narrative the MSM would ignore… We bring this back to your attention to show just how crazy the left is, and has been. Violence is all the left seems to know. Nothing has change since 2015…

In fact they have stepped out and become more bold than ever.

Trump was scheduled to speak in Worcester that night.

The tweet, by Kalen Rahim, read, “All you Worcester gangsters and what not. You clearly have a mission on Wednesday. Kill Donald Trump” 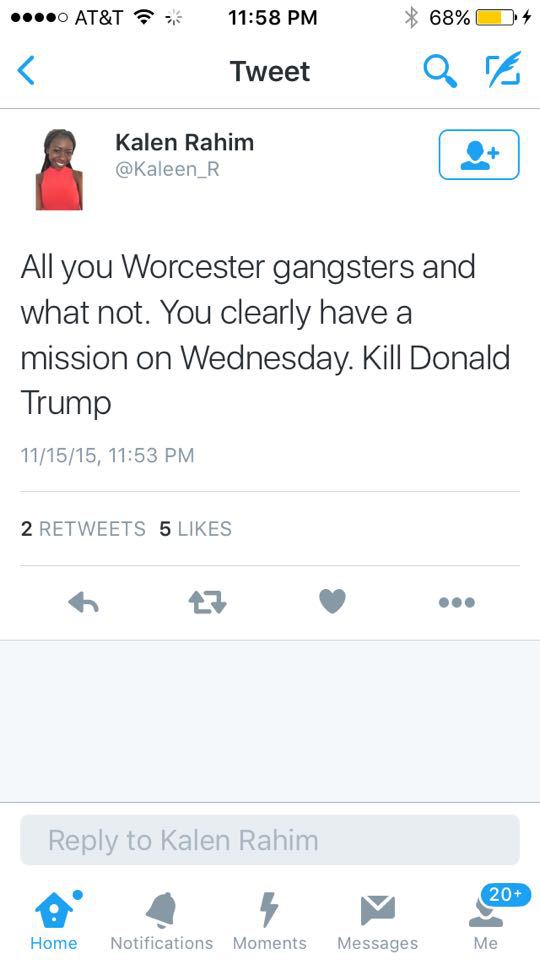 TurtleBoy Sports posted an article about leftists planning to protest and disrupt Trump’s speech in Worcester, leading with the assassination bid.

The woman reportedly called police to complain about a blog that posted a screen grab of a tweet she posted on Sunday calling for Trump’s assassination.

The site posted a follow-up article on Tuesday based on reports from readers that the woman called Worcester police to file charges against TurtleBoy Sports because she was reportedly fired from her job after the initial TurtleBoy Sports article about her assassination bid was posted.

“…as it turns out a bunch of people were listening to the police scanner yesterday around 7:30 when a cruiser was dispatched to this young lady’s house. But they weren’t going to investigate the threat, they were going because SHE called the cops. Apparently she was fired from her job today, and consequently she wants to file charges against Turtleboy Sports for……something. Because if you’re a millennial in 2015 then nothing is every your fault and there should never be consequences for poor decision making.”

The woman alleged to have called for Trump’s assassination, Kalen Rahim, has made her Twitter and other social media accounts private.

UPDATE: The Secret Service was aware of the online threat and took steps to investigate and ensure Trump’s safety last night.

See more on this: https://www.follownews.com/hashtag/kalen-rahim-worcester


Previous HYSTERICAL: Spammer Gets HUGE Dose Of Karma, And It’s All Caught In Texts

Next Wacko Maxine Waters Receives Brutal Karma In Front Of Her $4.5 Million Home