A woman in Ontario felt so uneasy by the product that she complained to Home Depot and soon others followed suit. They claimed it reminded them of a notorious serial killing rapist who terrorized communities in the 1980s.

As if it wasn’t strange and enough, one of the Scary Peepers taps on the window once it detects motion, while another moves its eyes when a person walks by. 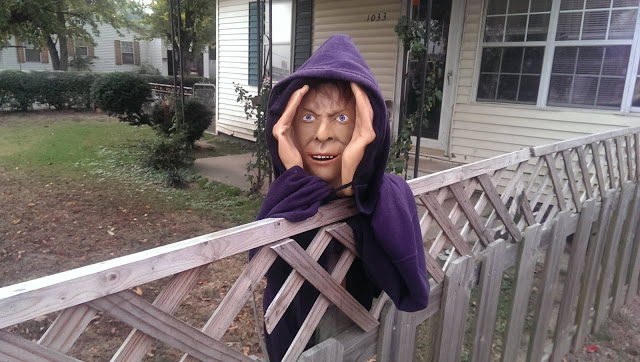 A woman in Ontario felt so uneasy by the product that she complained to Home Depot and soon others followed suit. They claimed it reminded them of a notorious serial killing rapist who terrorized communities in the 1980s.

Customers also took to Home Depot’s website to write in complaints and the company answered quickly by removing all Scary Peeper products from their 182 stores in Canada.

Twitter users weighed in on the discussion with one woman asking if these kinds of pranks are embedded in reality. “Before you buy a @scarypeeper or otherwise ‘prank’ women, ask: does this derive its meaning from a pervasive gendered reality? If so, don’t.”

Another user mocked the decision process to create this product. “Boardroom meeting: ‘I have an idea. Let’s design a doll that’s also a pervert,'” he wrote.

Julie S. Lalonde wrote that the Scary Peeper reminded her of an ex of hers who stalked her. “My abusive ex moved into the apartment behind me to watch me sleep. I’m horrified Home Depot ever sold this,” she tweeted.

One man found it strange that there’s now a fine line of what’s too scary for Halloween, considering demons, fake blood, and realistic looking prop weapons are still celebrated.

Here is a brief history of Halloween:

Halloween or Hallowe’en (a contraction of All Hallows’ Evening)  also known as Allhalloween,  All Hallows’ Eve, or All Saints’ Eve, is a celebration observed in a number of countries on 31 October, the eve of the Western Christian feast of All Hallows’ Day. It begins the three-day observance of Allhallowtide,[9] the time in the liturgical year dedicated to remembering the dead, including saints (hallows), martyrs, and all the faithful departed.[10][11]

It is widely believed that many Halloween traditions originated from ancient Celtic harvest festivals, particularly the Gaelic festival Samhain; that such festivals may have had pagan roots; and that Samhain itself was Christianized as Halloween by the early Church.  Some believe, however, that Halloween began solely as a Christian holiday, separate from ancient festivals like Samhain.

Halloween activities include trick-or-treating (or the related guising), attending Halloween costume parties, carving pumpkins into jack-o’-lanterns, lighting bonfires, apple bobbing, divination games, playing pranks, visiting haunted attractions, telling scary stories and watching horror films. In many parts of the world, the Christian religious observances of All Hallows’ Eve, including attending church services and lighting candles on the graves of the dead, remain popular,although elsewhere it is a more commercial and secular celebration.  Some Christians historically abstained from meat on All Hallows’ Eve, a tradition reflected in the eating of certain vegetarian foods on this vigil day, including apples, potato pancakes, and soul cakes.

History of Halloween from Wikipedia

Previous AOC Destroyed! and you wouldn't believe who did it!

Next Everyone Calls Them “ISIS.” Obama called Them “ISIL.” Here Is Why....