Some call her “mother of the year.” Others are offended at her harsh tactics. Which side are you on?

A California teen running late for school must have been thrilled when her mother agreed to write an excuse note — until she read it.

The note has been shared tens of thousands of times on Facebook, likely by applauding parents everywhere who know just how hard it is to get their children to school every morning.

Nicole Poppic wrote in the caption of the post, “This is what happens when you are tardy as a result of your own poor choices and you ask me for a note to excuse your tardiness,” adding a grinning emoji face wearing sunglasses for good measure.

“Cara is tardy this morning as a result of a condition known as teenage-ism,” Poppic wrote. “She suffered from an inability to remove herself from her bed, and also felt the need to talk back to her birth-giver.”

Take a look at the note and decide for yourself:

This is what happens when you are tardy as a result of your own poor choices and you ask me for a note to excuse your tardiness. ? 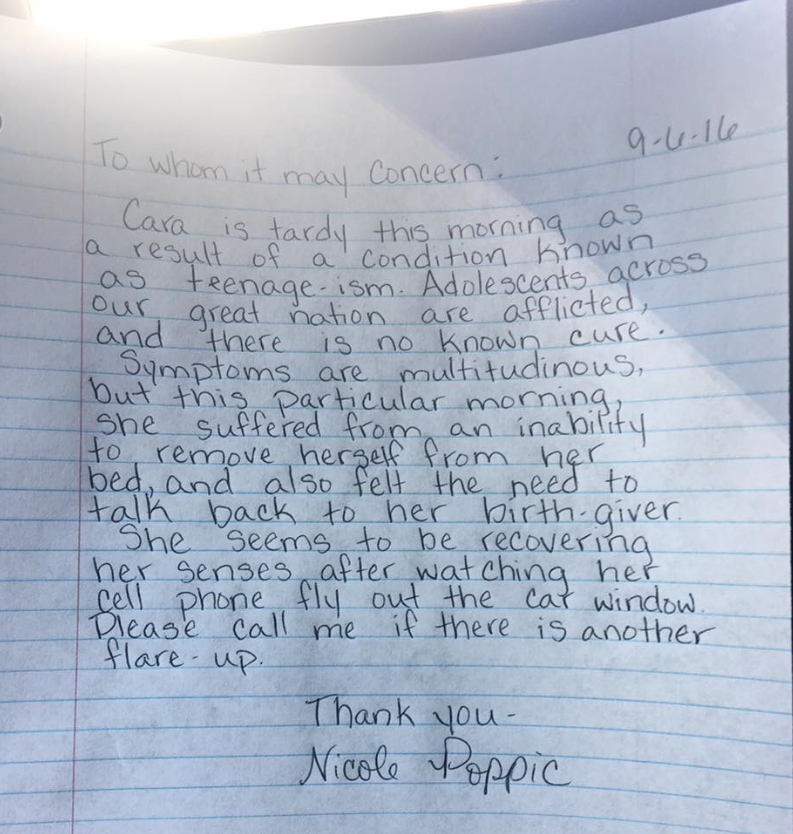 Some people were critical of Poppic for her tactic, but she explained that she and her daughter are close, and that her daughter understands the value of adding humor to a situation.

Take a look at these comments from Nicole Poppic’s Facebook page:

Tracy Rybicki LMAO good for you
September 19 at 5:32pm

Tracy Rybicki I would have did that same thing lol
September 19 at 5:33pm

Corrina Gutierrez Vanessa AnnMarie i feel like this would be about shuggie lol
1 · September 19 at 5:41pm

Mary Garcia Me to

Kathy Damitz Thompson Some one knows how to keep their teen in check! WTG
1 · September 19 at 5:44pm

Rachel Briggs Destroying your kid’s property is abusive, especially if it’s a communication device, doesn’t matter who paid for it. Not sure why so many people are patting the letter-writer on the back, that’s scary as hell.
7 · September 19 at 5:48pm

Julia Overbeek Good job mom. I’ve read in the comment that teenage girls are brats 95% of the time. Id just like to say that if your a Brat your going to have to face the consequences.
1 · September 19 at 5:55pm · Edited

Sharon Ibotta It’s scary to see how many people think this is good thing. Then you’ll wonder layer in life why your daughter has nothing to do with you. I wonder if you preach about love and respect.
4 · September 19 at 6:03pm

Brenda Hunt Alcorn You don’t have to preach about love and respect. Some adolescents need a wakeup call and getting rid of something they want is one way to do it. She’s not her best friend. She’s her daughter.
12 · September 19 at 6:13pm

Sharian McQueen This hilarious!!! I understand some are confused by her actions. Let me explain it is called training your child. Instead of having CPS or the Police do it. This is called teaching your child not to make excuses for your lazy actions but rather take re…See More
12 · September 19 at 6:04pm

Rachel BriggsIt’s throwing a tantrum and destroying a child’s property rather than attempting to solve a problem.
2 · September 19 at 6:20pm

Bryan SmithIf it was my daughter, I bought the phone and am the one laying for it. If I say “no phone” then guess what. No phone.
1 · September 19 at 7:41pm
SOURCE: [KFOR]


Previous SICK: First 'Palestinian' Muslim Congresswoman in the US refuses to condemn Hamas