Thousands of gun-rights activists have peacefully assembled at Virginia’s state capitol in Richmond. The Virginia Citizens Defense League has been celebrating Martin Luther King day with a corresponding rally every year, and nothing ever happened. This year, state officials are terrified a revolution might break out. They banned all weapons inside the capital grounds.

It’s only one more inconvenience, because just outside the fences are thousands of armed patriots, with their everyday arsenal of hardware. “These are your average common people carrying firearms that are in common use,” Jesse Lambert points out. The Louisiana native was “dressed in mix of colonial era minute-man garb and cargo pants, with a colt rifle strapped across his back.”

Not only was there a ban on weapons, the state’s liberal sissy of a Governor, Ralph Northam, declared a full state of emergency. So far, it hasn’t happened. As of 11 a.m. on Monday, the main stream media was disappointed to have to report “There were no apparent signs of violence.” They’re still hopeful that chaos will erupt.

“There were some signs of militia members in the crowd on Monday, but the rally seemed made up largely of ordinary gun-control supporters,” NBC was forced to admit. They didn’t like the fact that so many were “sporting shirts and hats proclaiming their support of President Donald Trump.” They were also upset about the “chants calling on Northam to resign and shouts calling journalists ‘fake news.'” 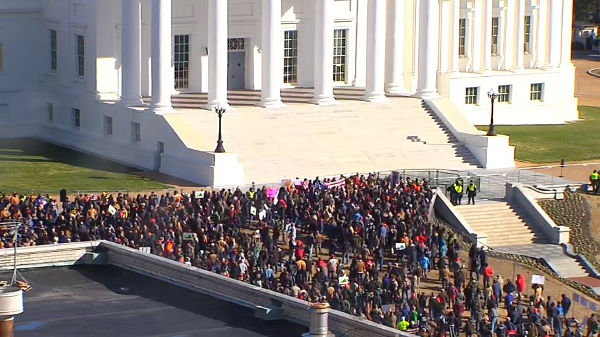 On Sunday night, a group of men corrected “a TV reporter who referred to ‘extremist groups from out of town,’ saying they were ‘freedom lovers, patriots.'”

Right on cue, the day after Northam declared an emergency, the Federal Bureau of Instigation conveniently arrested seven members “of a neo-Nazi group called The Base.” Law enforcement officials claim that they had been planning to attend the rally. Some wonder if it was one of the FBI informants who infiltrated the group months ago who put them up to it.

While there’s still time for the FBI to flush someone else out of the bushes, the “main-stream” media is doing their part to create controversy where there isn’t any.

NBC is taking a lot of heat from conservative media critics who point out that “an NBC reporter just blatantly lied and labeled the Virginia 2A supporters as neo-Nazis.” He quickly pulled down the tweet but not before it made the rounds.

Not only that, another NBC reporter, Gabe Gutierrez “openly lied about the protesters’ chants.” He posted a clip of patriots reciting the Pledge of Allegiance. In his caption he writes, “they were chanting ‘we will not comply.'” Totally untrue. The phrase can’t be heard anywhere in the clip. One follower commented, “you know we can also watch the video, right?”

Chants of “we will not comply” from gun rights protesters in Richmond. pic.twitter.com/BjEfniwMKP

Those attending the rally warn that the controversial measures, like “universal background checks, a ban on military-style rifles and a bill that would allow authorities to temporarily take guns from people deemed dangerous to themselves or others,” is only the first step in disarming the public.

“The government doesn’t run us, we run the government,” Kem Regik, a 20-year-old private security officer from northern Virginia avows. He was waving a white flag with a picture of a rifle saying, “Come and take it.”

Manny Vega of Richmond said they all were “here to represent every citizen” that wants to keep the right to bear arms.

Authorities “would not immediately give estimates on the crowd size.” One report notes, “streets surrounding the capitol grounds, several of which were closed ahead of the event, were packed with protesters.”

Despite the crowd, they weren’t there to cause trouble. As Sean Restatter noted, “There might be far-right and far-left groups that might be out here today, but the vast majority of the message is ‘guns save lives’ and we believe in the 2nd Amendment.”

Next He Pulled On A Rope While Out Hiking And Uncovered Something Absolutely Bone Chilling..