President Donald Trump earned the thanks of Economic World Forum founder Klaus Schwab on Tuesday, for “injecting optimism” into the conference. “We have many problems in the world, but we need dreams,” Schwab said.

President Trump was the only world leader at the annual economic forum in Davos, Switzerland who was actually there to talk about the economy. The United States is “in an economic boom the likes of which the world has never seen before,” he proudly proclaimed.

Davos was once world renowned as an economic forum but “in recent years has devolved into a politically correct event advancing social issues like climate change,” Hotair writes.

While all the rest were worried about the weather, Trump was there to state in no uncertain terms that “he is not allowing that agenda to tank the U.S. economy.”

Television crews had to split the screen because they couldn’t decide who to cover. At the same time Trump began his presentation, climate change activist Greta Thunberg took another stage at the conference, for the first of her two scheduled appearances. The Wednesday Adams lookalike has been preaching gloom and doom around the globe. Her presentation was titled “Averting a climate apocalypse.” 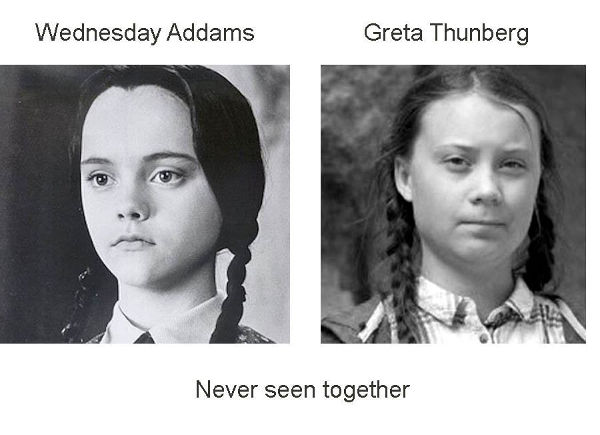 Trump told her to chill out in no uncertain terms. “This is not a time for pessimism. This is a time for optimism. Fear and doubt is not a good thought process.”

To embrace the possibilities of tomorrow, Trump insists, “we must reject the perennial prophets of doom and their predictions of the apocalypse.” President Trump compares climate change fanatics to “foolish fortune tellers.” These charlatans are never out to save anyone but themselves.

“These alarmists always demand the same thing — absolute power to dominate, transform and control every aspect of our lives.”

Not on his watch, Trump promises. “We will never let radical socialists destroy our economy, wreck our country or eradicate our liberty.” Alarmism is counter productive, President Trump points out.

“In America, we understand what the pessimists refuse to see. That a growing and vibrant market economy focused on the future lifts the human spirit and excites creativity strong enough to overcome any challenge.”

We can help save the planet without carbon tax credits and miles of red-tape regulations. “We are committed to conserving the majesty of God’s creation,” the President assures. We’ve joined an initiative to “plant one trillion trees” around the planet. That’s only one single program in a host of ways we protect our environment.

Thunberg sneers at the effort. “Planting trees is good, of course, but it’s nowhere near enough of what needs to be done, and it cannot replace real mitigation or rewilding nature.” Instead, she wants to do away with fossil fuels altogether, which is absurdly out of the question.

Past predictions of doom and gloom were wrong, Trump noted, “whether activists want to admit that or not.” Calling himself a believer in the environment, Trump clarifies that “it’s all about how to deal with economic progress while addressing carbon emissions and greenhouse gases.” Excessive environmental regulations and ideas like carbon taxes, the president insists, “are economic killers.”

Independent economists are behind Trump 100 percent on that one. Thunberg wants us to go back to the stone age.

“It is as though the alarmists wish us to live as in the pre-industrial revolution days.” one pundit writes, “this is where the absurdness of the demands of climate alarmists comes in.

It is completely unrealistic to promote an end to fossil fuels when the U.S. and the world, in general, are not equipped to live without them.”


Previous He Pulled On A Rope While Out Hiking And Uncovered Something Absolutely Bone Chilling..

Next Muslim cockroach massacres 186 Christian children, and says the most disgusting thing....