Senate Minority Leader Chuck Schumer turned green when reporters started asking him awkward questions about Hunter Biden and his role in the center of the Biden “corruption” scandal.

Schumer didn’t want to cut his own throat, after arguing about the need for testimony and documents in the interest of transparency. The problem is that the whole Biden issue is toxic to their case. Some Capitol Hill reporters pressed him directly as to whether he would “rule out testimony from former Vice President Joe Biden or his son.”

He decided on some fancy footwork and kicked the can down the road. They don’t need to hear, he insists, “from anyone unrelated to the charges.” Conservatives say that the Bidens are crucially related to the charges. If it wasn’t for Quid Pro Joe, then we wouldn’t be having the impeachment hearing in the first place. 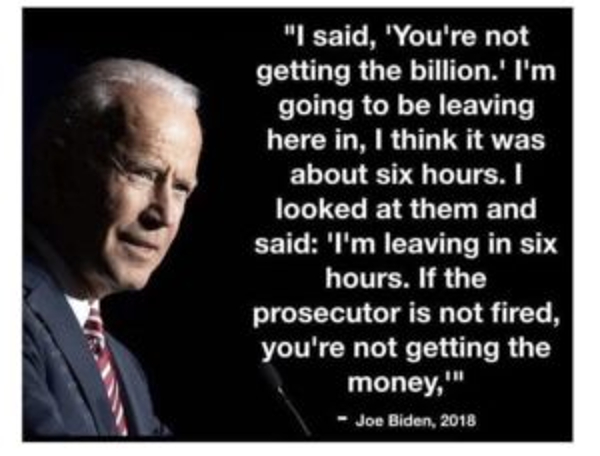 Schumer doesn’t think so. “The witnesses should have something to do with and direct knowledge of the charges against the president. We don’t need to have witnesses that have nothing to do with this.” He finished up with the standard talking point on the issue, “some are trying to distract Americans from the truth.” Yeah, the Democrats are.


The Truth is that the investigation at the core of Trump’s alleged abuse of power was looking into whether Joe Biden pressured the Ukraine into firing Prosecutor Victor Shokin for probing a company tied to Joe Biden’s son, Hunter Biden.

Secretary of State Mike Pompeo noted when the story first broke, that “if Vice President Biden behaved inappropriately, if he was protecting his son and intervened with the Ukrainian leadership in a way that was corrupt. I do think we need to get to the bottom of that.”

Hunter Biden was a director on the board of Burisma Group. USA today reports, “The New York Times reported in May that Biden, while in office in 2016, threatened to withhold $1 billion in U.S. loan guarantees unless Ukraine reduced its corruption. Part of that demand called for removing the country’s top prosecutor, Shokin, who was investigating the oligarch behind an energy company where Hunter Biden served on the board.”

How is that in any way different than what President Trump is accused of? Other than the fact Biden was protecting his benefactors while Trump was protecting America. Either neither of them did anything wrong, or both of them did. Biden is still the leading Democrat candidate for President. How can he remain in the running if what they both did is grounds for impeachment?

Obviously, the Democrats want it both ways, or at least, which ever way suits them at the moment. With Republicans firmly in the majority, President Trump is virtually certain to be acquitted.