One of the things that people seem to fail to understand about Democrats is that they are trying to hide as many of the horrible things about them that they can.

However, one of the good things about the world is that there are people in the criminal justice field that don’t care what party someone belongs to that will bring people to justice when they have done horrible things.

Take a look at just a few of the people that were Clinton donors in 2016, it seems that you almost couldn’t be a Clinton donor unless you were some kind of pervert at the same time.

A prominent donor to the Democratic party has just been arrested and charged with several counts.

Ed Buck, who has donated large sums of money to the campaigns for Barack Obama, Hillary Clinton, and other Democrats in his home state of California, has been charged with three felonies: battery causing serious injury, administering methamphetamine, and maintaining a drug house. California prosecutors are asking that Buck, who they call a “violent, dangerous sexual predator,” be held on $4M bail.


The prosecutors for the case say that Ed Buck offered drugs, money, and shelter to vulnerable drug addicts in Los Angeles in exchange for participation in sexual fetishes.

Two men died of overdoses in his drug house last week, and a third nearly died this week. Prosecutors are also tying the deaths of two men in his apartment in 2017 to his fetish of administering illegal drugs to strange men.

The Los Angeles Times reports that the most recent victim entered Buck’s apartment where Buck “personally and deliberately” gave him a large dose of methamphetamine. The man attempted to get help by escaping to a nearby gas station. He was then rushed to a hospital and treated, but if he was not he likely would have died. 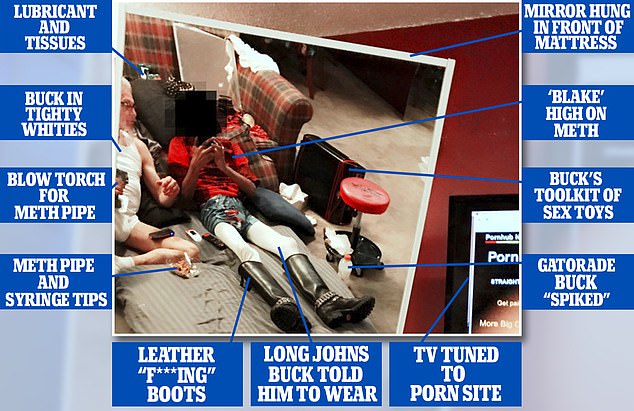 Community activists were on hand to cheer the arrest. They have been speaking out about the donor’s actions for years, but believe authorities were slow to act due to Buck’s connections to powerful political figures, including California Governor Gavin Newsom.

The police deny that Buck’s connection slowed the case at all, or that the fact that he is a white man who preyed on vulnerable black men.

If he is convicted of all charges, Buck faces a maximum sentence of five years and eight months in state prison.