President Donald Trump enthusiastically marched into the pages of history on Friday when he became the first U.S. President in 47 years to stand up against the murder of unborn children by attending the annual March for Life.

President Trump “is assured of a hero’s welcome,” A leading French paper writes, proving that this unprecedented event is getting the full attention of the entire world. “You’ve heard a lot of religious leaders and a lot of Republicans say that this president is the biggest champion for life… the biggest advocate for the pro-life movement in history,” White House spokesman Hogan Gidley told reporters ahead of this year’s rally.

Ever since the U.S. Supreme Court declared that Roe v. Wade made abortion legal in 1973, protesters have been marking the event with the annual gathering. Ronald Reagan and George W. Bush both delivered remarks remotely, but until now, even the Republican presidents have decided to keep their distance.

“I ask every citizen of this great nation to listen to the sound of silence caused by a generation lost to us,” the President said in his RSVP announcement, “then to raise their voices for all affected by abortion, both seen and unseen.” 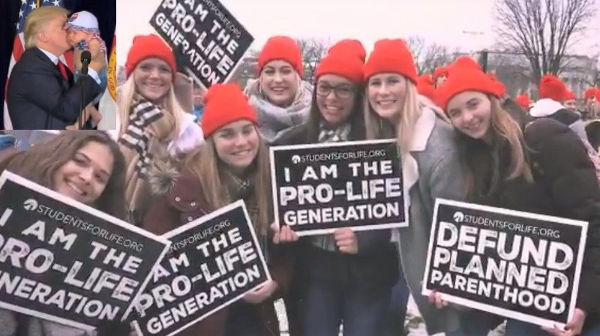 “He will be the first president in history to attend,” proclaims March for Life President Jeanne Mancini. “We are so excited for him to experience in person how passionate our marchers are about life and protecting the unborn.” The President attended in spirit last year, participating by video.

Christian conservatives and pro-life advocates are well aware of all the victories accomplished by the Trump administration in such a short amount of time. “From the appointment of pro-life judges and federal workers, to cutting taxpayer funding for abortions here and abroad, to calling for an end to late-term abortions,” Mancini notes, “President Trump and his administration have been consistent champions for life, and their support for the March for Life has been unwavering.”

Marjorie Dannenfelser agrees. “President Trump has governed as the most pro-life president in history.” She’s at the helm of anti-abortion group SBA List. She swears to do everything in her power to ensure four more years of the same. “We are proud to stand with President Trump and are going all in to ensure his re-election.” Her group aspires to “visit four million voters” between now and election day to hammer down “abortion extremists.”

Film maker Abby Johnson is the former Planned Parenthood clinic director switched sides to become a pro-life advocate. Her 2019 movie “Unplanned” has been an inspiration to countless others. She didn’t hold back any of her enthusiasm for President Trump. “Pro-lifers, there has NEVER been a president in U.S. history that has done more to break down the abortion industry more than @realDonaldTrump,” she tweeted. “Not Bush, not Reagan…no one.”

A spectacular crowd numbering in the tens of thousands is expected to turn out for this year’s event. There will be a rally followed by the traditional march up Constitution Avenue to the Supreme Court Building and Capitol.