Shifty Adam Schiff has everyone on both sides of the aisle wondering if he has any grasp on reality at all. He freaked out on Sunday after President Donald Trump reminded him that actions always have consequences. Now, the Democratic House impeachment manager fears for his life. “I think it was intended to be” a threat, he told NBC.

The way that Schiff describes it, he has to keep looking over his shoulder everywhere he goes. He seems to think there are CIA snipers on his neighbor’s rooftops and he’s afraid to start his car. The Twittersphere was quick to back him up on that totally unfounded allegation.

Is this the US President threatening the life of a US Congressman, a leader of the opposition party? Does not really matter: Fact we are having a legitimate debate about whether or not President is ordering hit on Congressman means we have already lost our way as a republic.

“Is this a death threat?” Andy Ostroy posted, calling President Trump “a dangerous sociopath.” Economist David Rothschild tweets, “Is this the US President threatening the life of a US Congressman, a leader of the opposition party?”

No, it isn’t a death threat. First of all, let’s put the exchange in context, Trump actually sent out a series of tweets.


“The Impeachment Hoax is a massive election interference the likes of which has never been seen before. In just two hours the Radical Left, Do Nothing Democrats have seen their phony case absolutely shredded. Shifty is now exposed for illegally making up my phone call, & more!”

“Shifty Adam Schiff is a CORRUPT POLITICIAN, and probably a very sick man. He has not paid the price, yet, for what he has done to our Country!”

Cooler, wiser, heads realize that all Trump is doing is pointing out the grave harm that Schiff’s kangaroo court has inflicted on the nation as a whole. Without a doubt, there will be lasting consequences.

Oklahoma Senator James Lankford told CNN, that he didn’t consider the tweet a threat. “I don’t think he’s encouraging a death threat. I think what he’s saying is Schiff will be held to a price, politically.”

The Republican Senator was also highly “offended” that Schiff flat out lied to the Senate in the impeachment trial on Friday.

“CBS News reported last night that a Trump confidant said that key senators were warned, ‘Vote against the president and your head will be on a pike.’ I don’t know if that’s true,” Schiff said during his closing arguments. It isn’t. 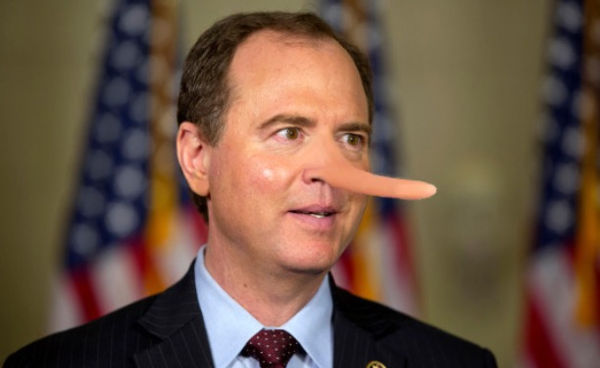 “It’s completely, totally false,” Lankford exclaimed. “None of us have been told that. That’s insulting and demeaning to everyone to say that we somehow live in fear and that the president has threatened all of us.”

Joni Ernst called it “baloney,” asserting she was listening close “until he got to the part where he just completely made a bunch of bullcrap up.”

It’s not surprising that several Republicans shook their heads and were overheard saying, “That’s not true.” What is startling is that even some Democrats were taken back by the remark Schiff pulled out of his nether regions. “That could have been left out, that’s for sure,” Democrat Joe Manchin laments.

The Republican team was unified in protest. Susan Collins pushed back, telling reporters, “not only have I never heard the ‘head on the pike’ line but also I know of no Republican senator who has been threatened in any way by anyone in the administration.”

John Barrasso insists, “No Republican senator has been told that. What he has proven to all of us is, he is capable of falsehoods and will tell it to the country.” Not only that, he’s bold enough to “tell it to us when we are sitting in the Senate chamber. When every one of us knows it is not true.”

“I thought he was doing fine with [talking about] moral courage until he got to the ‘head on a pike.’ That’s where he lost me,” Lisa Murkowski notes. “He’s a good orator. It was just unnecessary.”


Previous GOOD DOCTOR Asked MUSLIM WOMAN To Remove Her Veil For Exam. What She Did Will MAKE YOU SICK!