Joe Biden actually had a handful of people show up to to see him in Muscatine, Iowa, on Tuesday. Since he had a crowd of friendly faces he dared to ask a question. “Did anyone see what your senator, Joni Ernst, did yesterday?”

The Iowa Senator, fed up with sitting through endless wasted days of innuendo and speculation from the House impeachment managers, got to the core of the matter. On Monday she told reporters that she was “really interested to see how” the charges against Biden and his son, Hunter Biden, “informs and influences the Iowa caucus voters, those Democratic caucus-goers. Will they be supporting Vice President Biden at this point?”

The hand picked crowd disagreed but they’re a small minority. Biden doesn’t really have any way to respond to the allegations so he ducks them instead. It isn’t helping. Trump’s request for Ukraine to investigate Hunter Biden and Joe Biden, which they were doing already, is the core issue of the President’s impeachment trial.

Instead of standing up for himself and fighting back with hard facts, because he can’t, he tells the crowd that letting Donald Trump beat him to a verbal pulp shows he can take it. Hopping off his bus at one stop after another across Iowa, Biden declares, “As much as he’s trying to destroy me and my family — I hope I’ve demonstrated I can take a punch.” 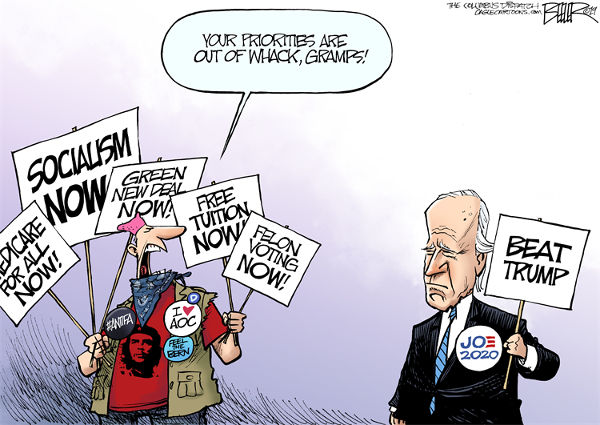 Reporters covering his campaign, he told voters, “keep asking me, ‘You know, they just brought up your son Hunter, and they’re doing this and they’re doing that and the other thing.’ Well guess what? I don’t hold grudges because presidents can’t hold grudges. Presidents have to be fighters, but they also have to be healers. They have to be healers.” It sounds to the rest of America as if he’s whimpering, “medic.” Someone needs to haul him off the field and bandage him up.

Biden supporters say they “aren’t worried about the efforts of Trump’s lawyers and Republican lawmakers,” CNN writes, “to paint Biden and his family as corrupt” because, well, because they’re Biden supporters. “I’m hoping that people are smarter than that and they will see through all of that,” retired banker Pam Symmonds relates. She has “been watching the impeachment proceedings every day and is supporting Biden in spite of the GOP attacks.”

Not all Iowa voters are that trusting. Kari Blomberg, who works at a university in Coralville, is confident that Biden will easily take the nomination but beating Trump is a totally different story. He’s already looking like a bloody stain on the carpet in that contest. “Biden and his son are a target for Trump, and I don’t know how that’ll play out. It’s hard to tell. His electability seems high if I look at all the polls nationally, but I don’t know how that’s going to play out.”

Next BREAKING: PRESIDENT TRUMP COULD BE ACQUITTED AS SOON AS THIS FRIDAY!