You would like to think that some public figures have a certain level of decorum when it comes to how they communicate in public.

However, as you go out into the world you quickly see that there are folks that just don’t care about any kind of decency anymore.

There are millions of good decent people that watch the Super Bowl every year and when the halftime show comes on, it used to be a portion of the evening where you would hear some good music and it’s something that everyone could watch.

Now, it wouldn’t be all that surprising if there were full-blown sex acts happening on stage.

The pole dancing and crotch shots during the halftime show on Sunday left viewers in shock.

Shakira and JLo were the two main performers on Sunday.

J-Lo danced on a stripper pole and even brought her young daughter on stage. It was awful and not family friendly. Keep it classy! 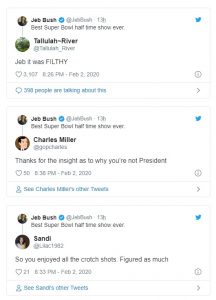 Next Shades Of Hillary? Rickety Joe Biden Being Led Everywhere By The Hand By WHO? (VIDEO)