Last night we all sat down and listened to or watch the State of the Union given by the 45th President of the United States, Donald J Trump. Those who attended the speech said it was a tense atmosphere, and the partisanship was at an all time high. The tension could be seen building as President Trump handed out a copy of his speech from the podium to Vice President Mike Pence, and Speaker of the House Nancy Pelosi. Vice President Pence didn’t offer a hand shake to the President after being handed his copy of the speech. Speaker Nancy tried to give a hand shake after receiving her copy for some reason. It isn’t clear at this time if the President even saw her reach out her hand, or if he intentionally snubbed her. Either way, she was only virtue signaling for the main stream media and her crazy, unhinged supporters.

President Trump’s speech was the by far the best speech he has given as President to date! He boasted about the incredible economy numbers. He talked about his administrations future plans to push us even further into technology accomplishments. At one point, he mentioned how America would be sending a man and a woman to Mars!

The President also went on to cover the great accomplishments of our amazing military. He talked about the missions that lead to the eradication of the terrorist scum al baghdadi, and the Iranian general terrorist leader Soleimani. These sub human scum bags were a drain on society and responsible for hundreds of thousands of American lives being injured or lost. United State’s intelligence agencies have all agreed that a majority of the attacks on our military in Iraq were orchestrated by these piles of garbage. Their deaths have made this world a little bit safer for you and I as well as our brave men and women serving.

Our President also took time to remind the Democrats that Socialism will never be allowed to take root in our Great Country as long as he is President. This was a repeated theme we have heard from President Trump as the growing number of self avowed “Democratic Socialists” have gained seats in the United States house and Senate has grown in the last 8 years.

The President was disrespected throughout all of his speech by the Democrats from boo’s, to hissing, even on things like our military accomplishments, and soldiers returning home from deployment! While we have always had our differences between parties in the past, there has typically been a sense of decorum showed while the State of the Union address was given. At the end of the Speech as some stood and applauded, Speaker Pelosi decided to commit a crime. Not just any crime, a felony on LIVE TELEVISION! Seen here Pelsi Commits a FELONY!, the oh so brave Speaker Pelosi takes the Speech and rips it in half like a petty child.

How could this be a crime you ask? Look no further than

(a) Whoever willfully and unlawfully conceals, removes, mutilates, obliterates, or destroys, or attempts to do so, or, with intent to do so takes and carries away any record, proceeding, map, book, paper, document, or other thing, filed or deposited with any clerk or officer of any court of the United States, or in any public office, or with any judicial or public officer of the United States, shall be fined under this title or imprisoned not more than three years, or both. 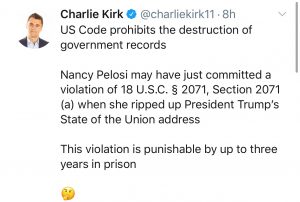 Prominent people across social media took to their accounts last night to point out this crime. We hope Attorney General Barr will leap into action against her with the full force of the Department of Justice! We can no longer sit  idly by and allow these Swamp creatures to break the law, and walk the streets unpunished!