Recently, when the terrible explosion happened in Lebanon, you saw that we don’t exactly have the greatest record of keeping track of dangerous weapons.

A warehouse full of explosives that wasn’t kept track of caused this. Now, when you come to the United States we don’t have nearly that kind of problem but we do have one that can cause bad implications as well.

A live air-to-air, radar-guided missile was just discovered at the Lakeland Linder Airport in Florida, East of Tampa, and the airport was ordered to evacuate. We have analyzed the markings of the missile storage container and discovered this missile is a Matra R530F missile, which uses radar guidance and could be used to bring down Air Force One or a similar-sized airplane. 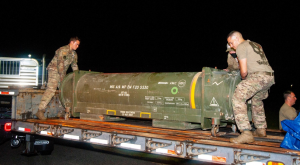 This is highly relevant to current events, given that a U.S. Air Force helicopter used to help provide security to President Trump during short flights was fired upon last week, causing an emergency landing to be initiated, after which one occupant required hospitalization, according to media reports.


AmericanMilitaryNews.com is carrying the details of this radar-guided missile which was discovered in the Lakeland Linder Airport, citing both BayNews9 and ABC Action News. From AMN:

“This weekend we received a call that a contractor at Lakeland Linder Airport had discovered a guided missile. Our 6th EOD team helped secure it with the help of ATF, the Lakeland Fire Department, and our 6th LRS team who provided a flatbed semi for transportation,” MacDill Air Force Base said in a statement posted to Facebook on Monday. “It is currently sitting in a munition storage facility on base awaiting proper disposal.”


Previous BREAKING: TRUMP HAS SAID "ENOUGH", HE IS SENDING IN THE NATIONAL GUARD!