Islam’s self-stated purpose is to dominate and govern all men and their affairs through its religious teachings. Its followers are permitted to realize this goal by any means possible, for nothing is considered sinful so long as it is being done for the cause of Allah and the spread of Islam. Any society that has been under the influence of Islam, whether it is through an Islamic government or sizable Muslim population, is at risk of becoming part of the Dar Al-Islam (House of Islam).

Two famous Spaniards — the canonist Fr. Bernardo Perez de Chinchón and Archbishop St. Juan de Ribera — along with many other Catholics saints and learned men, taught that peace and stability cannot persist in a society where Islam maintains influence in public life or private matters because of its intrinsic drive to conquer and convert. Consequently, if a society wishes to preserve itself from Islamic domination and flourish, it must reduce Islam’s influence – with the goal of eventually eliminating it.

The ability of the Church in a particular region to manage the threat posed by Islam in its diocese has determined which societies survived and overcame Islam’s influence and which societies apostatized to Islam and are still Muslim today. Unfortunately, the latter is more common than the former, as is demonstrated by the conversion of many once-Christian nations to Islam, and, for the surviving faithful, a tenuous, slave-like existence as dhimmis under Islamic law.

It is critical for those evaluating the contemporary threat of this growing religion to remember the Catholic nations that historically stood up to Islam, and, after much struggle, eventually recovered their homelands and liberty to worship freely as Catholics again. Such was the case with the Spanish and Portuguese peoples. Both nations independently fought an eight centuries-long civil war to initial victory, with yet another century of extirpating widespread Islamic rebellions by people who professed outwardly to be Catholic but were secretly Muslim.

The lesson to be learned is clear: We are to always love, pray, make sacrifices, and preach to the Muslims for the sake of their conversion and salvation. But when Muslims willfully reject the Gospel and choose to follow Islamic theology’s next logical step — undertaking jihad against the “infidel” Christians — the Church and the faithful have an obligation to stand up and fight for the Faith, and for their lives.

Several years ago, I visited a Coptic Orthodox Church on the East Coast of the United States. For those who are not aware, the Coptic Orthodox Church in Egypt has survived under Islam since Egypt was invaded in 639. It is facing potential extinction today, however, because of the same Islamic zeal and aggression by which Iraqi Catholicism was just exterminated. I met with the priest at this particular Coptic Church in his office, accompanied by a priest I’ll call “Fr. T”, an elderly Xaverian missionary priest from Seville, Spain who is learned in Islam.

The Coptic priest told us many things, including his assessment of Islam as a grave threat. He related that the Muslim persecutions had been growing worse recently in his home country. What I found most informative, however, was something he said near the end of our discussion. When Fr. T and I asked the priest if the Coptic Christians would take a more aggressive stand against Islam in response to the persecutions, he answered,“The Coptic Church has been a suffering Church, and martyrdom is a part of the cross we are called to bear.”

Upon hearing this, Fr. T looked at me with surprise, and turning his eyes toward the Coptic priest, he leaned forward and said,“Martyrdom is a calling for individuals, and maybe groups. It is not the vocation for an entire people. That is suicide!”

After our meeting, I went into the parish hall. There was an event taking place that morning, and the church had prepared a small buffet. The room was filled with the delightful smells of shawarma, stuffed grape leaves, and saffron. Fr. T was busy talking to another person, so I sat and had begun to eat when an elderly Coptic woman sat down next to me. I struck up a conversation with her, and when I told her a little about myself and my background, she smiled warmly and began speaking in an animated and passionate Arabic.

Over the next hour she told me her life story, about growing up in Egypt, being harassed by Muslims, the threats made against her and her family, and how she eventually came to America with her adult children and their families because the persecution was too severe. She said that she was disappointed by many of her fellow Coptic priests and parishioners. In her words, because they did not take an aggressive posture against Islam and the Muslims who habitually harassed them, they worsened their own standing. She added that because Islam has no concept of love, Muslims only respond to force. That it is the only thing they understand.

She told me that one of the last confrontations she had with the Muslims was right before her family left Egypt. She and a friend were walking home when a group of young Muslim men approached them and began verbally and physically harassing them for being Christians.

“Do you know what I told him?” the woman said.

“I did not show him any fear. We pushed him back and punched him, and we screamed at them ‘Your god is ****, your prophet is ****, and you are **** because you believe in them!’ They ran away, because all Muslims are cowards, and they are afraid when you stand up to them.”

My experiences at this Coptic Church mesh perfectly with the story I know of the Catholic Faith and its historical struggles against Islam. Many of the great Catholic men and women who worked with Muslims were not simply missionaries and martyrs. They were also great warriors, those whose love and self-sacrifice for the conversion and salvation of Muslims – sometimes at the cost of their own lives – did not prevent them from taking up arms to defend the Faith when necessary. The victories they won throughout history were so important that Europe would be Muslim today were it not for them.

Thirteen years ago today, Muslim terrorists attacked the United States of America, on September 11, 2001. They chose this date because it is the day of remembrance for the last great Catholic victory against Islam – the Battle of Vienna in 1683. It was that battle that threw the Ottoman Empire and the rest of the Muslim world into gradual decline and marked a period of global expansion and prosperity for Christians across Europe.

Yet were it not for Blessed Pope Innocent XI, who called for the battle, Blessed Fr. Marco Criado, who led Catholic soldiers on the front lines, and the intercession of the Blessed Virgin Mary, Europe would have fallen. In the words of King Jan Sobieski after the battle:

I came, I saw, God conquered.

Many people who have been closely following the new rise of Islam across the globe — including Europe and the U.S. — have been warning that something must be done. As one who has spent many years studying Islam, I tell you with deep concern that the hour has grown late. The Muslims know this, too, and are openly discussing the full Islamization of parts of Western Europe by 2030, when they are expected to account for 26% of the global population, giving them significant political and societal advantages as an effect of their growing demographic.

There are steps that the Church and her bishops can take. But the laity must also be ready, for it was they who rallied all those centuries ago in Vienna to defend the Faith against the sword of the Muslim invaders.

Pray for the Church. Seek Our Lady’s intercession for the conversion of Muslims and avoidance of war.

And if the tide cannot be turned, we must do one last thing: prepare for battle.

Our very survival may depend on it. 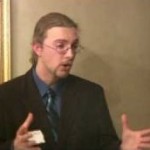 Andrew Bieszad has an MA in Islamic Studies from Hartford Seminary with concentration in the Islamic equivalent of Dogmatic Theology. He is the author of Lions of the Faith: Saints, Blesseds, and Heroes of the Catholic Faith in the Struggle with Islam. He is a sought after writer and speaker on Islamic topics.

Next PALESTINIANS CELEBRATING 9/11. AND THEY WONDER WHY WE THINK THEY ARE SCUM.