The Brown funeral is now long past. The extremely ugly thing about the Brown event is the racism inherent in the news coverage and the usual race-baiters jumping in front of the cameras and demanding justice, while completely ignoring the shooting deaths of young black men all over the country. Your Race-Huckster-In-Chief sent three goons to the Brown funeral while completely ignoring the funeral of General Greene. Obama was personally playing golf during both events. He cannot be expected to be everywhere. 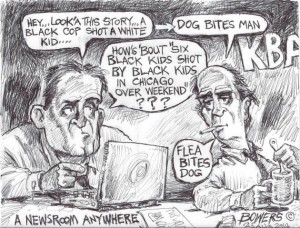 In Chicago it seems to be open season on young black men. You remember Chicago? The city with perhaps the most stringent “gun control” laws in the country…along with Washington, DC and New York City (also vying for murder capital of the country). Chicago, whose Mayor is Rahm “Tutu Boy” Emmanuel, another proud proponent of gun control. The recent weekend count of murdered young black men in Chicago was “six.” I think that was a light weekend for the cops and Coroner.

For some reason the death of Mr. Brown, who had only very recently before his death, been engaged in robbing a convenience store, roughing up the (diminutive) patron thereof and smoking dope, rates high on the news station producers’ perceived sense of importance.

Why are there no riots when a bunch of young black men get shot in Chicago over a weekend? Why does the usual troop of race baiters not appear in front of Tutu Boy’s office to protest the fact that being a young black man in Chicago is like sending an engraved invitation to the Grim Reaper, but knowing Al Sharpton (sans the Mary Tyler Moore hairdo), Jesse Jackson and various rap stars will not be among The Reaper’s retinue.

For the record, I have failed to mention in my last couple pathetic little essays how there are now Kurdish women among the troops fighting against I.S.I.S. in Iraq. Apparently, this fact drives the I.S.I.S. creeps ape. Apparently, being killed by a woman is a sure fire way to forgo getting the $200 for passing “Go” and skip Heaven entirely. I have failed to mention this fun fact while, at the same time, including Kurdish women references in my cartoons, which weren’t self-explanatory. A guy can forget details. It happens when you’re having fun picking on the jerks of the World.

Next PENTAGON OFFICIAL: WHAT IT WILL TAKE TO WIN THE WAR AGAINST ISIS