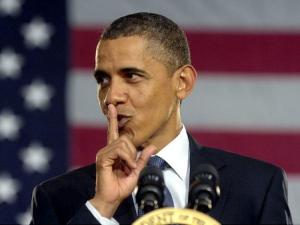 Connect the dots: Obama met with cleric who supports Hezbollah on 9/11
By Allen West

US President Barack Obama gestures for the crowd to keep quiet about his visit to the O&H Danish Bakery to buy kringle pastries so that First Lady Michelle Obama wouldn’t find out about the visit, during a town hall event on the economy at Racine Memorial Hall in Racine, Wisconsin, June 30, 2010. AFP PHOTO / Saul LOEB (Photo credit should read SAUL LOEB/AFP/Getty Images)

Just yesterday we shared the story of the reception given to Senator Ted Cruz at the “In Defense of Christianity” conference Wednesday in Washington D.C. where he was booed off the stage. As you can read here, there are Christian clerics who have some interesting ties to the vile Iranian-backed Islamic terrorist army and organization known as Hezbollah — who has the blood of our Marines on its hands from Beirut in 1983. Now you might think what happened at the conference was bad enough, but folks it gets worse – not surprisingly.

As reported by the Washington Free Beacon, “President Barack Obama and White House national security adviser Susan Rice met with a delegation of Christian Middle Eastern leaders in Washington, D.C., on Thursday that included at least one Hezbollah-supporting Lebanese cleric. The meeting came one day after Sen. Ted Cruz was booed off the stage for defending Israel while giving a keynote address at a “In Defense of Christians (IDC)” conference for the same delegation of Christian leaders.”


Yes ladies and gentlemen, our president, Barack Hussein Obama, met with a cleric who supports Hezbollah on 9-11. The same Obama who the evening prior in his defective ISIS strategy speech had the nerve to say ISIS is not “Islamic.” And then went on to show more indignation that ISIS has killed Muslims rather than the genocide against Christians and other religious minorities.

According to the Beacon, “one of the clerics who met with Obama was Lebanese Maronite Patriarch Beshara Rai, the Daily Star reported on Thursday. Rai has called Israel an “enemy state that is occupying Lebanese territory” and defended Hezbollah’s right to attack the country. “Everyone says why is Hezbollah carrying arms?” said Rai in a 2011 interview with Al-Arabiya. “We responded that the international community did not exert pressure on Israel to withdraw from Lebanese territory. As long as there is an occupied Lebanese territory, Hezbollah will maintain that it wants to carry arms in defense of its land. What will we say to it then? Isn’t [Hezbollah] right?”

“Rai also welcomed a meeting with Hezbollah terror leader Hassan Nasrallah when he returns to Lebanon to discuss the problem of ISIL in the region. “A dialogue committee already exists between [the Lebanon Maronite Church] and Hezbollah, and we are ready to hold any meeting in this respect,” said Rai late last month. The Maronite leader said the meeting with Obama was productive, according to the Daily Star.”

Productive for whom and in what manner? It seems Iran has found a way to influence American foreign policy even while they denounce America and build a nuclear capability. There can be no doubt that this whole episode was devised by the Ayatollahs, Hasan Rouhani, their best proxy army Hezbollah, and its leader Hasan Nasrallah. How better to infiltrate D.C. at this time than to masquerade as holding a conference on defending Christians — interestingly enough there was no support from the major Christian conservative groups like Family Research Council for this conference or these clerics.

From a geopolitical viewpoint, I am quite sure the purpose of the meeting was to bolster support for Assad, Hezbollah, and the Iranian cronies, as Obama threatens to enter into an air campaign in Syria and arm the shadowy elements of the Free Syrian Army. Somehow by scary default, Obama may find himself purposefully assisting and enabling Iranian, Shiite and Alawite efforts.

The Beacon says, “according to an IDC press release, another attendee at the meeting with Obama was Orthodox Church Patriarch Moran Mor Ignatius Aphrem II, who posted photos on Facebook from his meeting with a “high level delegation from Hezbollah” last week. Antioch Church patriarch Gregory III Laham, who has called anti-Christian terrorism in Iraq a “Zionist conspiracy against Islam,” also attended, according to the press release. “We want to thank President Obama at this critical moment in history for meeting with the representatives of these Christian communities from the Middle East who face suffering and hardship for professing their religious beliefs,” said IDC President Toufic Baaklini in a statement.


Previous LITIGATION NATION: Jimmy John's being sued for sandwiches not having sprouts