A self-described “frustrated” President Barack Obama took aim Wednesday at those he said “think we should hide from the problem” of Ebola.

Flanked by health care workers who have been treating Ebola patients in West Africa, Obama stressed the need to combat the virus at its source so that it does not spread, including within the U.S. 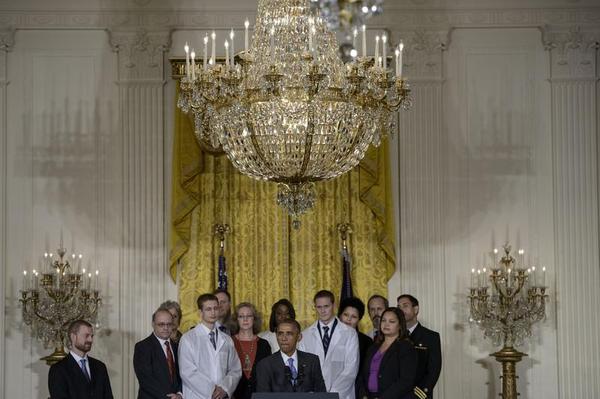 “When I hear people talking American leadership and try to avoid leadership and have us running in the opposite direction and hiding under covers, it makes me a little frustrated,” Obama said. He later added, “I put those on notice who think we should hide from the problem. That’s not who we are. That’s not who I am. That’s not who these folks are. This is the United States of American. We do things differently.”

Obama said that if health care workers are discouraged from traveling to Africa to help, the U.S. will be putting its own health at risk.

“It’s critical that we remain focused on the facts and on the science,” Obama said.

Several states have enacted 21-day quarantine periods for people returning to the U.S. after being exposed to the virus. Without mentioning the nurse who was briefly quarantined in New Jersey despite testing negative for Ebola, Obama said returning health care workers must be treated with respect.

“They do it or no other reason than their sense of duty, purpose and a cause greater than themselves,” Obama said. “We should call them what they are, heroes. And they deserve to be treated with dignity and respect.”

“If we’re discouraging health care workers who are prepared to make these sacrifices from traveling to these places in need, then we’re not doing our job in looking out for our own health and safety,” Obama added.

Next Here’s what happens when your blood meets viper venom, and it’s not pretty