Jeb Bush framed opposition to Common Core as a misunderstanding and blamed President Barack Obama for the opposition. 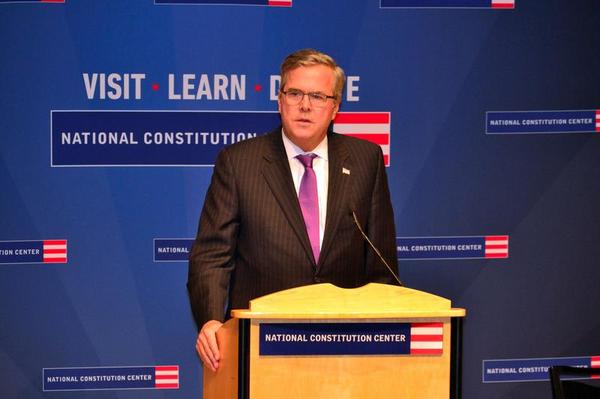 Speaking amid mounting speculation that the former Florida governor will enter the 2016 Republican presidential race, Bush said discussion of the Common Core State Standards “has gotten way off track,” the Nashville Tennessean reported.

Bush said opposition emerged to the standards because Obama began to “take credit for it.” That’s because the Obama administration tied adoption of Common Core standards with receiving Department of Education “Race to the Top” grants.

“A lot of moms concerned about their children expressed those concerns, and they’re doing it today,” Bush said, speaking from Vanderbilt University. “But the shame is that no accountability and low standards and no assessment of how those kids are (performing) will doom those kids. That’s the tragedy.”

The Common Core standards were developed by the National Governors Association and the Council on Chief State School Officers. Though 44 states initially adopted the standards, several states have either scrapped or are reviewing the standards after complaints from parents and teachers.

Earlier this week, Jeb Bush’s son George P. Bush said his father would likely run for president. The son and brother of former presidents is also reportedly being prodded by other family members to enter the 2016 campaign.

Bush told the Nashville crowd that he is setting a deadline of the end of the year to decide “what’s in my heart.”

In another matter where he is at odds with much of the Republican base, Bush touted comprehensive immigration reform.

“We can deal with it by creating a system where we get the first 100,000 first-round draft picks before anyone else picks,” Bush said. “Embracing the rule of law and embracing our immigrant heritage together is not some radical idea. Apparently, that’s politically crazy. I don’t know. It makes no sense to believe the opposite.”