House Speaker John Boehner plans to move forward with his Obamacare lawsuit “soon” and is not concerned about a government report that liberal critics say wipes out its legal arguments, a spokesman said. 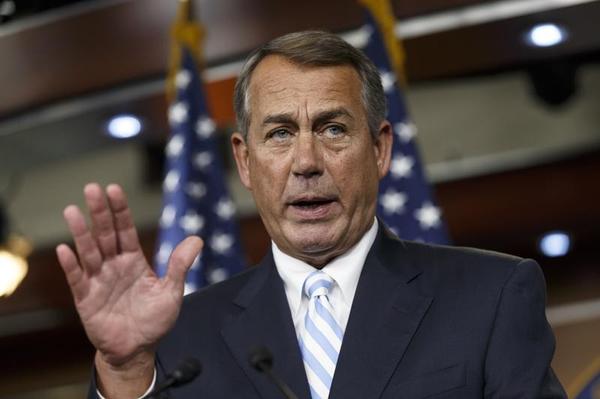 “We will hold the president accountable for unilaterally rewriting the law, and the lawsuit will be filed soon,” Boehner spokesman Kevin Smith told TheBlaze.

A report from the nonpartisan Congressional Research Service garnered unwarranted attention in recent days, Smith said, because liberal commentators have misinterpreted the report.

“That isn’t going to change simply because two liberal advocates have drawn inaccurate conclusions from a CRS report,” Smith added.


The report cites, among other things, that the Supreme Court gives discretion to agencies on delaying or not enforcing certain regulation, a potential justification for the Department of Health and Human Services not to enforce the Obmacare employer mandate to provide health insurance plans to workers.

The employer mandate, a key part of the Affordable Care Act, was set to take effect in 2014, but was delayed and is now scheduled to be in place for all employers by 2016. The House lawsuit seeks to hold President Barack Obama to his constitutional obligation to “take care that the laws be faithfully executed.”

“Often, the agency has not been able to accomplish the required action within the time provided by Congress,” the CRS report stated. “In this type of situation, the agency simply has not taken any action; therefore, no rulemaking procedures are required. However, as mentioned above, an agency may be subject to a suit by a party seeking to compel the agency to take action.”

The CRS report was first reported in a Washington Monthly piece by Simon Lazarus and Elisabeth Stein, attorneys with the Constitutional Accountability Center, a liberal think tank.

“In other words, having been asked whether the Obama administration had crossed all its T’s and dotted its I’s, the CRS’ answer was unequivocal: yes it had,” the attorneys wrote in what they said was distilling the conclusion. “In bland CRS-speak, this seems like a veritable finger in the eye – or perhaps, a blunt warning to the speaker to drop the lawsuit project.”

The CRS has no legally binding authority, but as the research arm of Congress has credibility with both sides.

The CRS report said courts determine whether these delays are reviewable in court by following the Supreme Court’s decision in the 1985 case of Heckler v. Chaney, which held, “an agency’s decision not to prosecute or enforce…is a decision generally committed to an agency’s absolute discretion,” the CRS report said, quoting the high court ruling.

The report was not published to support or refute the House lawsuit, but rather to examine the legal questions of an agency’s missed deadline for taking congressionally-mandated action, or suspended enforcement of a law passed by congress, and whether these delays are reviewable in court.

A “fact sheet” from the speaker’s office says the House lawsuit “is not based on a violation of regulatory procedure.” Boehner’s office also said the report has nothing to do with when the lawsuit will be filed.

“When agencies implement new rules or regulations, the APA requires that certain rulemaking procedures are followed,” the speaker’s office said. “However, an agency is not able to do whatever it pleases simply because it follows a rulemaking procedure. It cannot override or ignore the intent of Congress signified by clear language in a statute. The president acted beyond the scope of his authority when he chose to not enforce the employer mandate because the terms of the mandate were laid out in clear, unambiguous language – you can’t get much clearer than a firm date.”


Previous If Democrats Really Pinned All Their Election Hopes on This One Thing, They Really Could Be in Trouble

Next Look at this realtime interactive Ebola outbreak map of the USA is not very reassuring....