Controversial, undercover filmmaker James O’Keefe has released a new video alleging he was offered ballots in North Carolina “some 20 times” by giving election officials the names of inactive voters.

In the video, O’Keefe says there are over 700,000 such voters in the state, “which creates a recipe for voter fraud on a massive scale.” He set out to show just what that fraud might look like by visiting numerous early voting places. 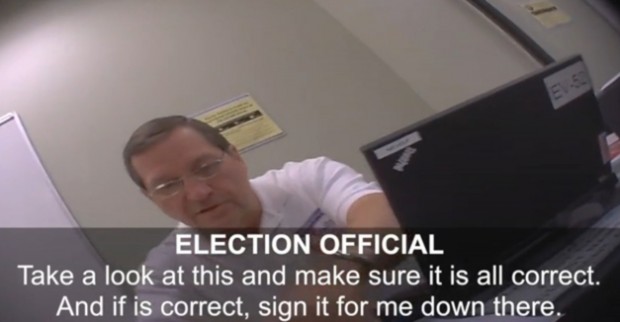 O’Keefe was careful to claim he never actually said he was the alleged voter, only asking if a name was on the voting list when he arrived and then verified the address. After that, he said, all but one location said all he had to do was sign verifying his information and then he would be able to vote.

“All I need to do is sign this, then I can vote?” O’Keefe asks on numerous occasions in the video. The answer was “yes.”

The one location that didn’t make it easy for O’Keefe seems to have broken election rules by asking O’Keefe to provide I.D. since records indicated the person who’s name he had given had not voted in a while.

“They wanted to protect the system,” O’Keefe says as he narrates the video, “and they had to break the rules to do it.”

It should be noted that TheBlaze has been critical of O’Keefe’s undercover tactics in the past. In general, our philosophy has been that such tactics — as well as ambush journalism — should be used only in extreme circumstances when one has exhausted all other options and all applicable recording laws should be followed.


Previous Lena Dunham, Liberal Feminist and Perverted Pig, 'LOL' About Raping Her Sister As A Child

Next White House: It Would ‘Not Be Wise’ to Draw Broad Conclusions From Midterm Results