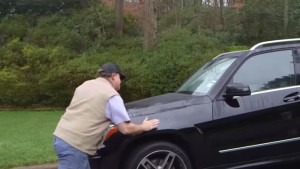 It happens to millions of people on a daily basis. You’re on your way to work or on your way home from work, or maybe you’re late to pick up the kids from school. The motorist in front of you is taking their sweet time and driving slower than the speed limit while chatting on a cellphone, or the motorist is tailgating you relentlessly.

Everyone who drives on a regular basis gets angry and those feelings are understandable. Stress from other things in your life weighs heavily on your mind during commutes, and that, combined with a particularly inconsiderate driver, can push you over the edge.

The key is, no matter how angry you get, to not give in to road rage. There are a lot of reasons why you shouldn’t give in, but the biggest one is this: you don’t know who will be in the other car. If you mess with the wrong person, it can end very badly for you.

The video is obviously staged, but it sends a powerful message — you never don’t know who the other driver is. It could be a world heavyweight champion boxer, or it could be a crazed lunatic who’s waiting to put his machete or firearm to good use.


No matter how much rage you feel, do the right thing — stay in the car.

Next [WATCH] Walmart Bans Greeter From Saying "Have A Blessed Day", But Then Backs Down After Community Rallies Behind Greeter