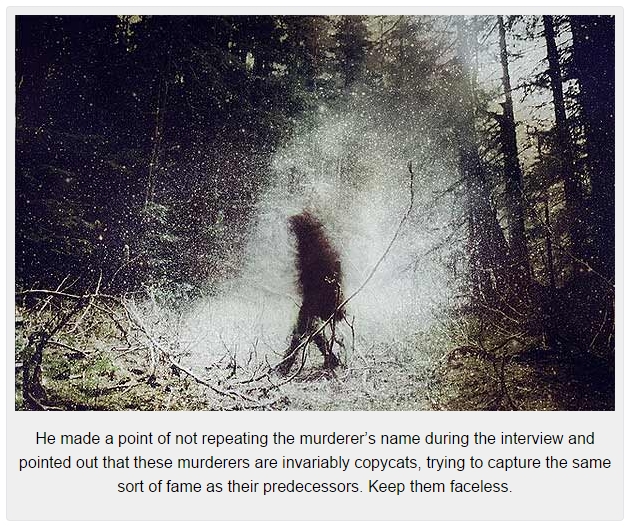 Last week a deranged coward joined a Bible study group in Charleston, South Carolina, sat with them for about an hour, and then pulled out a gun and started shooting people, killing nine.

He then drove away, only to be captured without incident a few hours later.

Reports say the demented little troll declared his need to kill the people because they were “raping our women and taking over our country.” How sick and detached from reality did this vile creature have to be to take these nine innocent lives – six women and three men – on such a pretext?

The answer to that was summed up very accurately by Dr. Michael Welner, a forensic psychiatrist who appeared on “Fox and Friends” a few days ago. During his brief interview, Dr. Welner stressed several things.

“The mass killer is an irrelevant person … who is looking for relevance,” he said. “Of course this is a hate crime. Of course it’s a racist crime, but the mass killer is about himself, and is about getting attention for himself, and he knows that if we have this ‘national dialogue,’ ultimately we’re talking about him.” He goes on to say, “This was a cultural crime. It is happening in the United States much more than elsewhere, but it’s not a gun issue – it’s because we socially incentivize it.”

Dr. Welner suggests that these murderers are seeking fame and attention, and that the media and politicians reward them by giving them that fame and attention. He said that rather than focusing on the infamy-seeking perpetrator, we should instead focus attention on the victims and what remarkable people they were. He offered up coverage of the murder of Chris Kyle as an example of a better way to handle these situations. In the Kyle case, the attention focused primarily on Kyle and his life and accomplishments. Welner pointed out that few people remember the name of the man who murdered Kyle because the media and politicians didn’t focus their attention and agenda on the murderer, instead focusing on the victims.


Dr. Welner’s comments comport with my own long-held belief and our policy of never naming these cowards in our reports. He made a point of not repeating the murderer’s name during the interview and pointed out that these murderers are invariably copycats, trying to capture the same sort of fame as their predecessors.

In typical, tone-deaf media fashion, one of the Fox hosts then launched into a question about how all of these depraved killers have the same sort of “empty look,” and prattled off the names of several of them, reinforcing their fame and notoriety.

Years ago, suicide experts prevailed upon media to avoid giving too much coverage to suicides, particularly teen suicides. After showing the data on “suicide contagion,” the tendency for one suicide to be followed by several more in a given area, they convinced the media to change the way they covered these events. The result has been a reduction in the copycat effect. If only the media and politicians would follow a similar standard of coverage regarding mass murders, we might see this trend dwindle as well.

Instead, politicians, including President Obama, most of the Democratic presidential candidates and a number of members of Congress, used this tragedy to re-launch their failed campaigns against gun ownership, focusing on the motives and tools of the murder, and only mentioning the victims as emotional leverage for promoting the agenda.

Meanwhile, as is their foolish policy, the NRA has maintained official silence since the shooting. Unfortunately, one of their board members has not. Charles Cotton, a director out of Texas, made a post on his personal blog suggesting that, were it not for Pastor Pinckney’s opposition to guns in church – something he voted against as a state senator – some of the nine victims might have survived the horror. Cotton’s comment was foolish and insensitive. It was picked up by an anti-rights group that distorted it and painted it as the opinion of the NRA. It has gone viral from there. An Internet search for “NRA Charleston” returns pages of headline results decrying the NRA’s attempt to blame the victims for the murders.

And still, NRA remains silent, allowing anti-rights radicals free reign to set the narrative, blaming the Association and, by extension, all law-abiding gun owners for the actions of one twisted, cowardly thug.

He did not use an “assault weapon” or “high-capacity” magazines in the attack, and his friends (including an African-American friend) say that he had expressed intentions to engage in a suicide attack at Charleston University, but they speculate that concerns about armed security caused him to alter his plans and instead go for the “softer,” unarmed group at Emanuel AME.

None of the gun control laws being pushed by President Obama, or any of the laws seriously discussed in the past two decades would have had any impact on this atrocity.

The loss of these nine precious lives in Charleston is heartbreaking. Blaming the tools and gun owners encourages copycats and is shameful exploitation of the tragedy.

Next UBER Driver Shoots Passenger Who Was Allegedly Choking Him