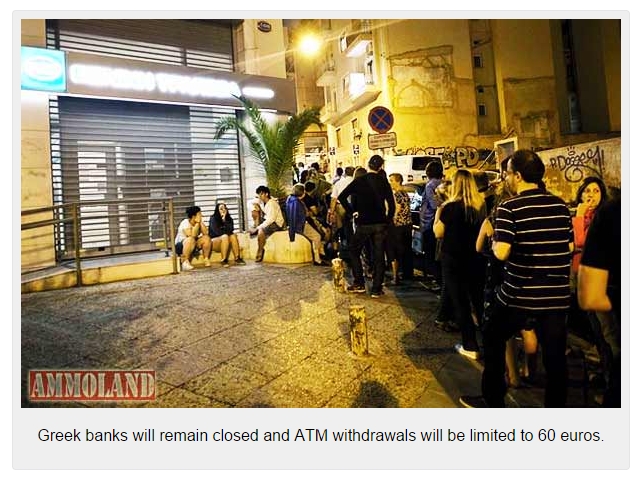 Imagine you got up this morning and you have little or no money. You are one of the Americans who have been sucked into believing all you need is a piece of plastic, that you carry in your wallet, that allegedly represents your money.

You have the habit of going to the local Stop-n-Rob convenient store to buy $8-10 worth of junk food and lottery tickets, but you pay for these items with plastic.

Sadly it is not real money you are spending. It is blips on a banking computer screen. If you were required to pull out a $10 bill to pay for your snacks every time you made these small purchases you would not have incurred the debt.

You have been conditioned to routinely not use real (remember it is fiat money) currency.


But, what happens if “they” turn off the electricity that all credit and debit cards must have to operate?

Or worse yet when the cards fail you physically, you go to your bank to find out what has happened to your money, and the banks are closed. Oh, this could not happen to a first world country like the USA (think 1929). You must be thinking of some South American banana republic that through greed and corruption has crashed their currency yet again.

Are you paying attention to what is happening to Greece?

Greece is not a third world banana republic, but it is the closest thing the Euro currency using European Union (EU) has to one.

When someone reminds me yet again that Greece is the cradle of democracy, and our western political way of life springs from that ancient civilization, I have to think of the old Janet Jackson song “What have you done for me lately.” (click the video only for sound track while you read the rest of my comments)

I am sorry but Greece is a joke for a nation. They got into the EU so they could have access to a (allegedly) real world currency (the Euro) since no one took the old Greek Drachma serious in international finance. And, they saw both the EU and the Euro as a ready and willing, well-stocked pantry of international welfare they would draw on any time with little or no consequences.

As the “good” Reverend Jeremy Wright said “the chickens have come home to roost.”

Not to worry, we Americans are safe here in the US, correct?

The problem for me is I have been reading the sixteen year old book the Patriots by James Wesley Rawles ( tiny.cc/0qy1zx ) this week as I also watched Greece continually show up on the TV news. Rawles has a four book series about what happens to America and the world when the US dollar crashes. I have read books two, three and four but finally got around this week to reading book one.

Actually, a fellow retired Air Force friend sent it to me and we have been burning up the phone lines taking about Patriots.

In all four books the US dollar crashes and the American way of life crashes with it. Everything disappears off the store shelves in the first couple of days. Very quickly what little cash people have is gone, and then what cash is left is worthless. In the early days of the “Crunch” as they refer to it, the US currency system crashes in Rawles’ book. For a very short time the paper dollar is king.

People who are trying to flee the cities find that what gas is let for vehicles, is selling for $30-50 a gallon. It is outrageous, but you will pay that much if you want to get out of Dodge alive. The problem is you don’t have a couple of hundred dollars in your pocket to buy five gallons of gas. You have your credit and debit cards which are worthless no matter how much you think you have in the bank.

In Patriots as the dollar crashes so goes any and all non-US economies that use the American dollar as their reserve currencies. There is nothing to buy and nobody goes to work. This to include all the public employees we expect to always be there: the military, police, firefighters, emergency medical, and those nice people at the big box stores who have been there for us for years–24-7.

What if we have a reverse Patriots scenario where Greece fails, then the Euro fails and Europe goes in to melt-down crisis. It may take a while, but their melt-down will severely affect North America.

Go to your bank and try to take out $10,000 today. Your banker has to report you to the Feds if you take out that much—big brother is watching. Your bank may tell you they have to have a 3-5 day notice from you that you want that much money so they can order it, and make sure enough green-backs will actually be in the bank when you come back to claim “your” money. If it starts, buy hard assets that you will need or can use to barter with later. Food and ammo are the most important items and something to store water in. A $15, five gallon water jug will sell for $100 empty someday.

The Greeks are socialist fools, but their foolishness could destroy the world monetary system. It gives a new meaning to expression “Greek-Style.”

About Major Van Harl USAF Ret.:Major Van E. Harl USAF Ret., a career Police Officer in the U.S. Air Force was born in Burlington, Iowa, USA, in 1955. He was the Deputy Chief of police at two Air Force Bases and the Commander of Law Enforcement Operations at another. He is a graduate of the U.S. Army Infantry School.  A retired Colorado Ranger and currently is an Auxiliary Police Officer with the Cudahy PD in Milwaukee County, WI.  His efforts now are directed at church campus safely and security training.  He believes “evil hates organization.”  [email protected]