September 14, 2004, I wrote the following syndicated column.  It was titled “Kerry Deserves Prosecution, Not Presidency.”  My reason for reusing it today is to point out what should be obvious and yet that which goes unreported by the mainstream media and that of course includes Fox News.

If John Kerry wasn’t fit to be president how is he fit to be Secretary of State?  If, as I factually pointed out in 2004, he was an unmitigated liar, why or rather how can we believe a word he is saying about Obama’s Iran deal today?

Read the following that I wrote nearly 15 years ago to the day and tell me if you think Kerry has in anyway gained credibility since then.

Let’s allow for the sake of argument that Democrat presidential candidate John Kerry is telling the truth about his Vietnam War experience.

[He] did take part in free-fire zones and [he] did take part in harassment interdiction fire. [He] did take part in search and destroy missions in which the houses of non combatants were burned to the ground. And [that] all of these, [he found] out later on … [were] contrary to the Hague and Geneva Conventions and to the laws of warfare. So in that sense, anybody who took part in those, if you carry out the applications of the Nuremberg principles, is in fact guilty [of war crimes].

Let’s allow for the record, all of his aforementioned statement is true. Then it would logically follow, one could argue, Mr. Kerry is unfit to be president – the Senate either for that matter, but that is another subject.

He is unfit because he is a war criminal, who to date has not been brought to trial or even charged. 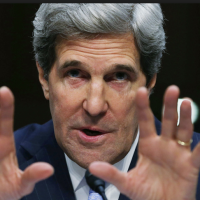 It would further go without saying that if the opposite is true, and Kerry lied about his participation in these so called “atrocities” (his words not mine), he is equally unfit to be president, perhaps even more so.

Either way Mr. Kerry is “unfit for command” of the United States, because he is either a war criminal or a liar – but he is unfit based upon his own repeated admissions.

But upon closer examination of Kerry’s self-confessed atrocities, one can see the clever and insidious Machiavellianism of his confessions.

Free-fire zones, according to a Vietnam veteran I spoke with, were so designated because they were areas in which there were no “friendlys.” This veteran told me: “According to reconnaissance, anything you expected to encounter was enemy … all recon indicated there were only ‘hostiles’ in these areas.”

It was explained to me that normally troops had to seek permission before firing at targets unless fired upon, but in an area populated only by “unfriendlys,” to delay while awaiting directions would have been fatal. Hence the designation “free-fire zone.”

It should also be pointed out that recon and long-range patrols had done their jobs supplying said intelligence for the protection of the others. In truth, free-fire zones were for saving lives of American soldiers. Kerry should have understood this unless he believed the preserving of enemy lives superseded the safety of American troops.

Kerry claims to have “taken part in harassment interdiction fire.” Once again, his parsed dishonesty is apparent for all who would see.

“Harassment interdiction fire” is just that – you are harassing the enemy to buy time until conditions favor your side. I am told it could be for the purpose of keeping the enemy pinned down or contained, but, in any event, it amounted to nothing more than shooting over the heads of the enemy, the alternative being to shoot them.

Search-and-destroy missions have been a necessary part of every war ever fought. Kerry should know this or it is he who is the dumbest presidential candidate of all time. The burning of noncombatants houses is a legitimate way to prevent the giving of aid and comfort to the enemy.

As it was explained to me, if weapons or an overabundance of foods stores were found, it was obvious to our trained personnel that the small village was a comfort and supply station for the enemy. The choices were to destroy it or simply make note of it, allowing it to continue in operation. It should also be pointed out that these were small, tiny areas – they weren’t the size of Baltimore.

Kerry’s clever parsing is an insult to all who served. He is aware that the supposed crimes he committed were not crimes at all – rather the necessary tools of bringing American boys safely back home.

It is interesting that in testimony before the U.S. Senate’s Committee on Foreign Relations, Kerry told how others had:

… raped, cut off ears, taped power wires to genitals and turned on the power, cut of limbs, blown up bodies, randomly shot at civilians, razed villages, shot cattle and dogs for fun, poisoned food stocks on top of the daily ravages of war; crimes [that were] on a day to day basis with the full awareness of officers at all levels of command.

Yet he did nothing to bring these supposed “Genghis Khan’s” to justice. He accused America of the injustice. Ergo, should we apologize to Lt. William Calley for holding him accountable for his atrocities at Mai Lai? If those who Kerry claims to have firsthand knowledge of are going to be given a mention and a pass, why prosecute the alleged offenders at Abu Ghraib?

I submit that if Bill Clinton was deemed unfit to be president because of lying before a grand jury panel, if Pete Rose has been found unfit for the Hall of Fame – his record notwithstanding – for betting on baseball, how can John Kerry be deemed fit for president of the United States? But then, perhaps I answer my own question.


Previous [WATCH] Maher to Rich Hunters: Cut Out the Middleman and Go Bag a "Trophy Republican"