For a long time, I’ve been telling you that Fox News isn’t the philosophical preserve of conservatism many would like to believe. Many people believe that Fox is the only network that features conservative programming and guests. No few of my colleagues and politicos are fully aware that my criticism of Fox News is warranted and factual, but they dare not say same for fear of their scholars and pundits not being invited to appear on Fox News programming. My opinion is and always has been that slanted reporting is not reporting you can trust. Drew Zahn, a news editor at WND.com, pulled back the curtains and shined the bright light of truth on Fox News’ political donations. (Fox News Parent Company Funneling Money To Dems; 7/23/13)

Rupert Murdoch’s News Corp owns Fox News; and Zahn found that News Corp donations favored Obama 5-to-1 over Mitt Romney in the 2012 presidential election campaign. “According to data accumulated from the Federal Election Commission by the Center for Responsive Politics and published on OpenSecrets.org, the total contributions by News Corp political action committees, employees and their families favored Democrats by a more than 2-to-1 margin in the 2012 election.” And if that isn’t bad enough, News Corp supported the radical left for nine of the last thirteen election cycles dating back to 1990 up to and including the pivotal 2012 elections.

Do you really think those donations did not buy bias reporting for Obama and left wing candidates? You’re darn right it bought favorable reporting – it’s just that Fox is cleverer at making the Democrat “ass logo” look like a Republican “pachyderm logo.”

This explains why Fox keeps the extreme radical racist, former ACORN member and Obama devotee Jehmu Greene around after she called Tucker Carlson racist pejoratives, live on-air. It explains why they hired Jesse Jackson’s daughter, Santita Jackson as a Fox News Contributor. It explains why Fox News allowed their bottle blond T&A Kewpie doll Megyn Kelly to smear Herman Cain before it was made known that Kelly was friends with the Herman Cain slanderer, Sharon Bialek. Kelly was forced to publicly make known that she lived in the same building with Bialek and her boyfriend; that they went to the same gym, and worked together in Chicago. There were also rumors that Kelly and Bialek paled around together.

I make no pretense of my disdain for Fox News, albeit I have great respect for Neil Cavuto and Greta Van Susteren. Beginning in 2008 when Fox News became the “Let Karl Rove Bash Sarah Palin Network,” I began decreasing my intake of Fox News. At that time it became apparent to me that Fox News was just a more polished version of MSNBC. I stopped viewing Fox News for good in 2012 when they refused to remove Jehmu Greene for spewing racial pejoratives at an on-air guest who was besting her bigoted viewpoints. Fox News gave Greene a complete pass when she spewed racist insults that they would not remotely tolerate from a white male.

What Zahn didn’t point out is the incestuous and tangled relationships many party insiders (on both sides) have with Fox. Does anyone think Karl Rove, et al were unaware that News Corp, i.e., Fox News, was donating to Obama by a 5-to-1 margin over Romney?

Now comes word that since 1992, Fox News has been one of the very top donors to Hillary and Bill Clinton, the number nine top donor to be exact. This news comes on the heels of our finding out the Fox News debate moderators were instructed to destroy presidential candidate Donald Trump. And that comes on the heels of my saying that Frank Luntz was a Fox News stooge running bogus focus groups being validated by none other than Politico. (See: Donald Trump Wants Fox News Star Fired; Cheryl Chumley) 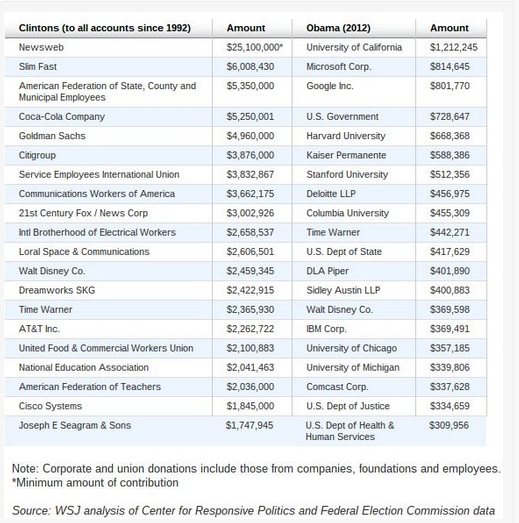 I’ve been “inside the beltway.” I know what it’s like when the camera lights go out. I know how the game is played and manipulated to keep people joined to one side or the other.

Those of us who are in the news and information business know slanted reporting when we see or hear it. But much to my chagrin and that of others, Fox has done a good job of pulling the wool over the eyes of many of its viewers. Fox doesn’t care because they know they don’t have to. People are going to watch them; pundits and politicos are going to bow before the News Corp throne to continue appearing as guests on their programming. And the people will continue to receive opinion intended to manipulate their decisions without realizing it.