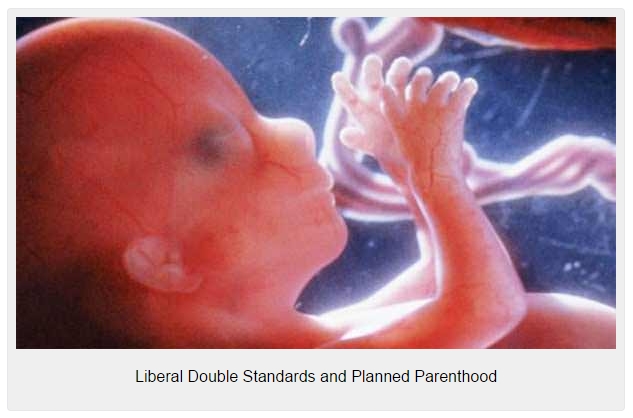 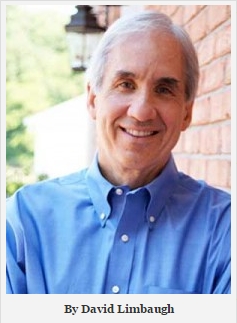 Liberals are famous for shaming conservatives for their past associations with questionable characters, while they exempt themselves from the same standards.

Every other week, a liberal Twitter troll cites a Republican politician’s innocent appearance at some long-forgotten political event with the likes of a Ku Klux Klan member, hoping to besmirch his reputation. Better yet, sometimes one of them will post a black-and-white photo of such an appearance, as if it’s a smoking gun that will end the hapless Republican’s career.

It shouldn’t surprise you that liberals had no problem with Sen. Robert Byrd’s despicable association with the KKK.

A typical liberal defender would say: “Oh, my gosh! This man was a pillar of progressivism. He cared deeply for people. He was the conscience of the Senate.”

How about Sen. Ted Kennedy? Liberals couldn’t have cared less that any other person would have been charged with manslaughter for his role in the death of Mary Jo Kopechne at Chappaquiddick.


Their attitude was: “Why, he is the ‘Lion of the Senate.’ No one cares more about the poor than he does.”

President Bill Clinton? As the most powerful man on the planet, he sexually harassed a young female intern in the White House, directly lied about it to the American people and committed felony perjury, for starters. Yet liberals still regard him as a man of unsurpassed class and virtue.

The Rev. Al Sharpton? The examples are endless.

Why do you suppose that is?

The reason is that for liberals, the acid test for one’s moral character is his ideology. Does the person support progressive causes? If so, it doesn’t much matter what he did in the past.

That’s not the case for Republicans. Even an accidental brush with a bad person or cause is fair game because conservatives, on balance, can’t be good people — even those with an unblemished record of selfless service.

Take Ken Starr, who served as independent counsel to investigate the Clintons. He was as pure as Snow White. But you don’t mess with Bill. Despite his stellar professional and personal record, the Clinton war room and the liberal media savaged him as a devious pervert.

Today we are witnessing another glaring example of this double standard. Planned Parenthood has been all over the news with the release of a series of horrifying videos showing it harvested and sold the organs of aborted babies.

Every decent American would condemn Planned Parenthood for this practice, right? Wrong. According to many progressives, conservative filmmakers selectively edited the videos to defame this noble organization, which provides “essential services for women.”

Liberals protect progressive organizations, but none more than those that perform abortions, for abortion is the foremost sacrament of the religion of liberalism.

Liberals will protect Planned Parenthood at all costs because it is darn near a holy shrine. 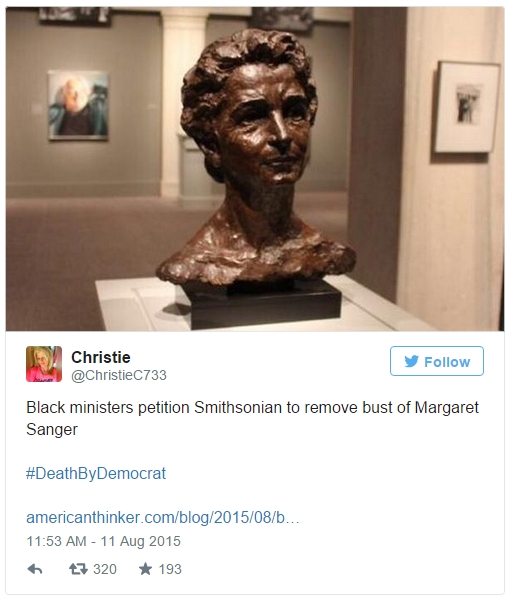 A group of black pastors from nine states demanded the removal of the statue because of Sanger’s ties to the eugenics movement.

“Sanger may have been a lot of things,” the pastors wrote in a letter to the Smithsonian, “but a ‘champion of justice’ she definitely was not. Perhaps the Gallery is unaware that Ms. Sanger supported black eugenics, a racist attitude toward black and other minority babies; an elitist attitude toward those she regarded as ‘the feeble minded;’ speaking at rallies of Ku Klux Klan women; and communications with Hitler sympathizers. Also, the notorious ‘Negro Project,’ which sought to limit, if not eliminate black births, was her brainchild. Despite these well-documented facts of history, her bust sits proudly in your gallery as a hero of justice. The obvious incongruity is staggering!”

The Smithsonian callously denied the request, saying that the bust serves its goal to “see the past clearly and objectively” and that though some of Sanger’s beliefs “are now controversial,” her inclusion represents the “full spectrum of the American experience.”

Translation: Liberals value abortion more than they do African-Americans. There is no way anyone can say “objectively” that Sanger was a champion of justice for African-Americans or that her horrific views were merely “controversial.”

This is stunning when you consider the lengths liberals go to pander for the black vote. They must figure that the objections are mostly coming from black pastors whose theology is light-years from that of such progressive blacks as Sharpton and Jesse Jackson.

It would be interesting to see how the Smithsonian would react if Sharpton and Jackson joined these pastors.

So while liberals are trying to purge America of symbols of its history of slavery, they are protecting the patron saint of abortion, whose attitude toward blacks was more despicable than that of a slaveholder.

She believed that reducing the black population, even if it meant killing the unborn, would purify the human race.

If enough attention were called to these types of things and a sufficient number of blacks began to realize that liberals have been using them for their votes, we might see a sea change in American politics.

For now, we must just marvel at liberals’ cynicism, double standards and hypocrisy. But one of these days, their conflicting “values” are going to come home to roost.