The host is a professional clown. The VIP guest is a political clown with more baggage than the Kardashians during Paris fashion week.

Setting aside the past plagiarism, fabulism, K Street cronyism, chronic gaffes and the stagnant aroma of 4-decades-old Beltway entrenchment, though, Biden’s two biggest cultural liabilities currently on the table (and everywhere else) are his grabby paws: Groper One and Groper Two.

Seriously, those two troublesome tentacles need to be wrapped in yellow caution tape and stamped with a trigger warning. Joe’s yuck factor is no joke.

Political observers of all stripes balked earlier this year at photos of the creep veep wrapping himself around the wife of Defense Secretary Ashton Carter — and nearly nibbling off her ear while he deep-massaged her shoulders. Poor Mrs. Carter, helpless in front of the cameras as her husband spoke just inches away, exhibited the body language of a shell-shocked hostage.

I can report on Biden’s cozy relations with trial lawyers, bankers and lobbyists ’til I’m blue in the face. But none of that sticks in the minds of average voters as much as the indelible impression of instability and ickiness he has left across social media:

Margaret Coons, the 13-year-old daughter of Sen. Chris Coons, D-Del., grimaced when the coarse whisperer nuzzled up to her at her dad’s swearing-in ceremony.

Senate Majority Leader Mitch McConnell’s elementary school-age granddaughter pursed her lips unhappily as Biden clamped himself around her face while he planted an uninvited smooch on her head.

Reporter Amie Parnes tried to block off Biden’s pincers as they crept too close for comfort from behind and climbed up her torso during a Christmas party photo.

If liberals are looking for an alternative to the sordid grotesqueries of the Clinton years, they’ll need to look harder. Biden may have authored the Violence Against Women Act in the 1990s, but it’s not enough to mitigate his ongoing invasive image problem. On college campuses, militant feminists partition off “safe spaces” to protect women from male menaces. But when close stalker Joe is on the campaign trail, there will be nowhere for unsuspecting victims of all ages to hide. 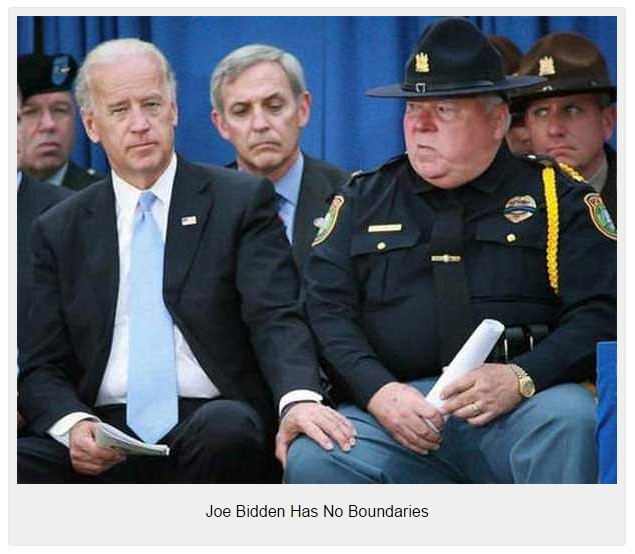 The creep veep’s apologists excuse his behavior as harmless good fun. Affectionate Uncle Joe’s just, you know, “old school.” But after an entire campaign season spent tarring Republicans as sleazy misogynists waging a “war on women,” Democrats can hardly afford their own cringetastic standard-bearer whom women, teens and young girls cannot bear to be around.

With Biden in command, America will have a hands-on president. That is not a good thing.