PIZZA GATE AND PEDOPHILE RING SHUT DOWN AS CONSPIRACY. We no longer have factual evidence to back these claims. Take from it what you will.

The reddit admins have shut down /r/pizzagate, a sub with nearly 25,000* subscribers, as well as certain other subs* which were set up to address suspected child abuse references in the Podesta emails which were published by WikiLeaks.

/r/pizzagate now directs you to the following message:

This subreddit was banned due to a violation of our content policy. Specifically, the proliferation of personal and confidential information. We don’t want witchhunts on our site.


This is not the first time a sub has been closed down for contravening reddit rules relating to doxxing, brigading, harassment and witch-hunting. Amidst the cries of censorship, keep in mind that the admins are simply applying existing sitewide rules, and it’s more than likely that reddit (and its majority owner Avance Publications*) have been pressured from external sources, with threats of litigation, removal of advertising revenue, etc.

So, where does that leave /r/conspiracy?

“Pizzagate” is a new aspect of an established conspiracy which has long been discussed, and will continue to be discussed, in this sub.

The key issue is that we, as a group, must ensure we don’t break the rules set out by the admins, or this subreddit could be next.

The mods of /r/conspiracy have always been vigilant about preventing doxxing, brigading and harassment coming from this sub, and to their credit, the admins have respected our independence and rarely interfere in the way we moderate /r/conspiracy.

This sub is many things, but it is not, and cannot under the terms of reddit, be a direct action group.

We can discuss, theorize and rant about whatever we like, but there must be absolutely NO brigading and NO contacting or harassing individuals within or outside reddit, even if you suspect them of criminal activity.

Anyone who engages in these activities poses an existential threat to this sub, so if you see any examples of this please notify the mods immediately, and we will remove the comments and report the offenders to the admins.

Other subs shut down by Admins because of pizzagate: r/CivilianInvestigators, r/SliceOfJustice,

Add one more person to the Clinton body count. Monica Petersen was found dead under “suspicious circumstances” while working for the Human Trafficking Center in Haiti. During the time leading up to the election, Wikileaks released thousands of emails linking the Clintons to pedophelia and strange connections to Haiti and child trafficking. Reddit User billclintonisarap1st has reportedly uncovered this new mysterious death linked to Hillary Clinton and the Clinton Foundation in so much detail, it can’t be denied.  Her friends are still searching for answers but know the answer deep down.

Monica was always critical of the Clinton Foundation and their dealings, she even went as far as writing a detailed article explaining what was taking place and the connection the Clinton’s had with the New York Times and Billionaire Carlos Slim who is known for his “humanitarian” activities.

Be sure to read carefully. More details from REDDIT

Tell Me Now had this to report:

A friend reports on what she was researching: 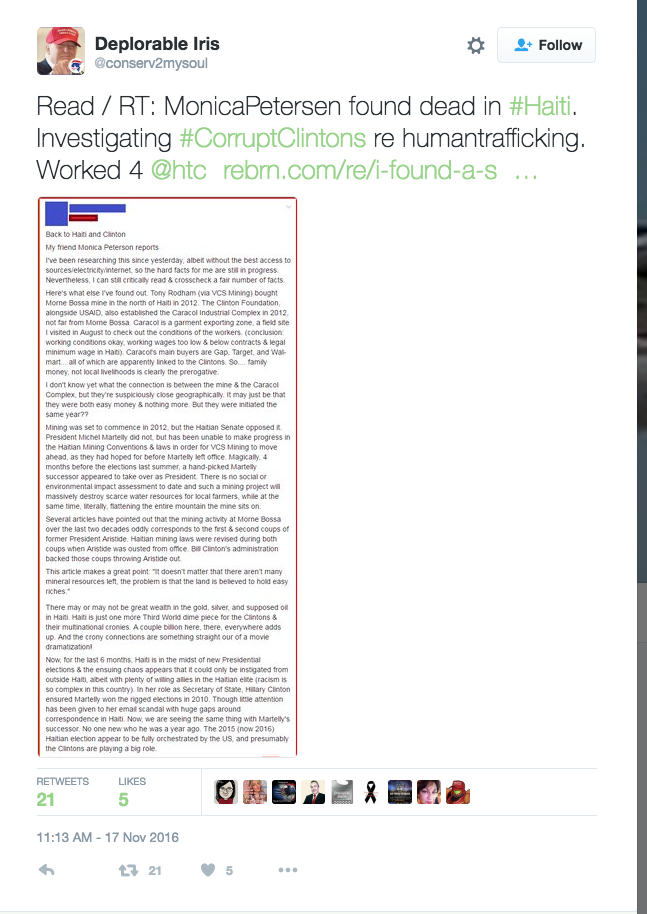 A friend of Monica’s Bella Robinson confirms that Monica was in Haiti at the time of her death and was investigating “the Clintons possible ties to a pedophile ring.”

As Bella reports her family “hasn’t been able to get any straight answers about her death.”

And she doesn’t believe it is appropriate to post what she knows in public.

One of her friends, after finding out about her death, has suggested continuing her work and heading to Haiti to find answers.

According to her Facebook, Monica Petersen had checked into Port Au Prince, Haiti.

PizzaGate is the disgusting elite child trafficking network with links to the occult.

Monica Petersen’s Memorial Service will be held Friday at 12:30 p.m. at the University of Denver.