After much speculation, it was finally announced today that Dr. Ben Carson was President-elect Donald Trump’s choice to lead the Department of Housing and Urban Development. Trump had tweeted a while ago that he was seriously considering Carson as HUD Secretary and Carson himself said an announcement was imminent.

Even though the news didn’t come as a surprise, Democrats still used the report to rail against Carson, largely based on his own adviser’s comments that Carson felt he wasn’t qualified to head an agency due to his lack of government experience. And the pesky little fact that, as a neurosurgeon who’s never held any office, one would be hard-pressed to find how he is qualified to look over HUD.

In response to this, Rep. Ted Lieu (D-CA) released a snarky statement in which he compared Carson’s nomination to someone staying at a Holiday Inn Express, making mention of his complete lack of experience and knowledge regarding housing and urban development. Lieu concluded by calling on Carson to withdraw due to being unqualified.

Despite there being no mention of race in his statement, one Trump supporter feels Lieu’s comments were racial in nature. Milwaukee Sheriff David Clarke, who is being considered by Trump to head up the Department of Homeland Security, sent out the following tweet today.

Right away, many wondered what Clarke was talking about regarding “ugly race politics” regarding Lieu’s remarks on Carson. 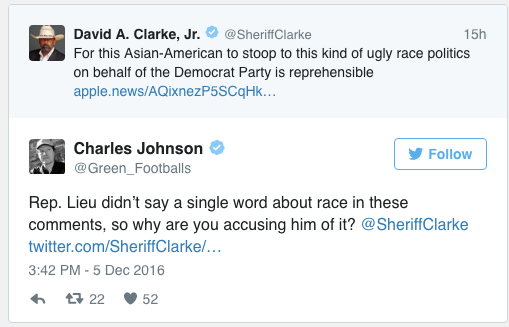 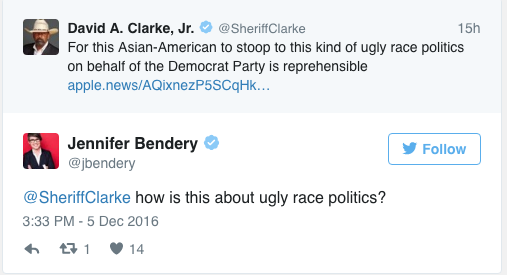 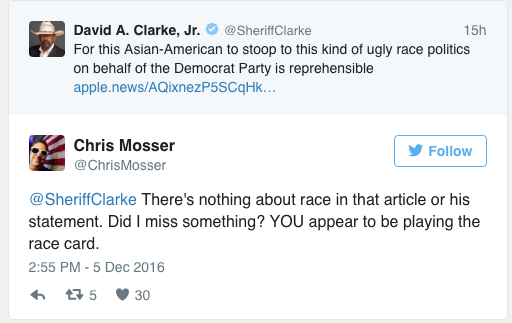 Clarke wasn’t the only one accusing Democrats of being racist when it came to opposing Carson as HUD chief. After House Minority Leader Nancy Pelosi said Carson was not qualified, Mike Huckabee took to Twitter to call her either racist or dumb.

Next Madonna Gives her 2 Cents on Why TRUMP Won, Pretty Sure She Was HIGH or DRUNK