In a direct blow to Barack Obama’s legacy, President Donald Trump has revoked federal guidelines that allowed public school students to use the restroom and locker room that associated with the gender they identified as.

As the Solicitor General’s office said in an official document submitted to the Supreme Court on Wednesday, the Obama directive that was passed last May failed to “undergo any formal public process.”

Now Trump’s administration is striking back. They claim the Obama-era pro-transgender directive never explained how it was “consistent with the express language of Title IX,” the federal law that outlaws sex discrimination in educational facilities and activities.

Education Secretary Betsy DeVos has backed the new move. She wants to remove the federal rule that stated transgender students can use the bathroom they feel most comfortable with and force them to use the restroom consistent with the sex stated on their birth certificate.

“This is an issue best solved at the state and local level,” DeVos said. “Schools, communities, and families can find — and in many cases have found — solutions that protect all students.”

Attorney General Jeff Sessions also wants to back the federal government out of this sensitive issue.

“Congress, state legislatures, and local governments are in a position to adopt appropriate policies or laws addressing this issue,” Sessions said in a statement. “The Department of Justice remains committed to the proper interpretation and enforcement of Title IX and to its protections for all students, including LGBTQ students, from discrimination, bullying, and harassment.”

The Justice and Education departments penned a joint letter to the nation’s public schools. The letter claimed that the Obama-era guidance “has given rise to significant litigation regarding school restrooms and locker rooms.”

The federal government has withdrawn these guidelines “in order to further and more completely consider the legal issues involved.” 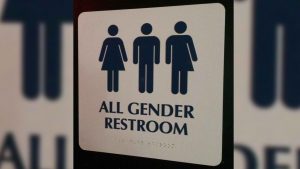 On the surface, this roll back won’t change anti-bullying safeguards. But transgender students will be exposed to more opportunities to get bullied. If a transgender girl is forced to use a boy’s locker room, it seems like there will probably be trouble.

“All schools must ensure that all students, including LGBT students, are able to learn and thrive in a safe environment,” the federal statement said.

The immediate impact this letter will have on schools is uncertain. It does not ban schools from allowing transgender students to use the bathroom they identify with, it only does not require schools to do so.

The White House said “returning power to the states paves the way for an open and inclusive process to take place at the local level with input from parents, students, teachers and administrators.”

“Reversing this guidance tells trans kids that it’s OK with the Trump administration and the Department of Education for them to be abused and harassed at school for being trans,” said American Federation of Teachers President Randi Weingarten.