A Chinese tomato-lover was shocked when he took a bite of his favorite fruit last week and found what appeared to be a strawberry inside.

Wang Xiaowen, a university student from Shenyang, has shot to fame in China after sharing pictures of his ‘straw-mato’ on social media on March 23, reported People’s Daily Online.

The 24-year-old told MailOnline that he had bought the tomato from a local supermarket. It looked and tasted normal.  Wang, who studies mechanics at the Shenyang Institute of Technology, bought a few tomatoes on March 23 for two yuan (20p) per pound.

He took a bite of one of them at noon and realized there were no seeds inside. What’s more, there seemed to be a strawberry in the middle. The man showed the apparent straw-mato to his classmates and none of them could explain the phenomenon.

Wang was so impressed by the tomato that he decided to posted the pictures on Weibo, the Chinese equivalent of Twitter. 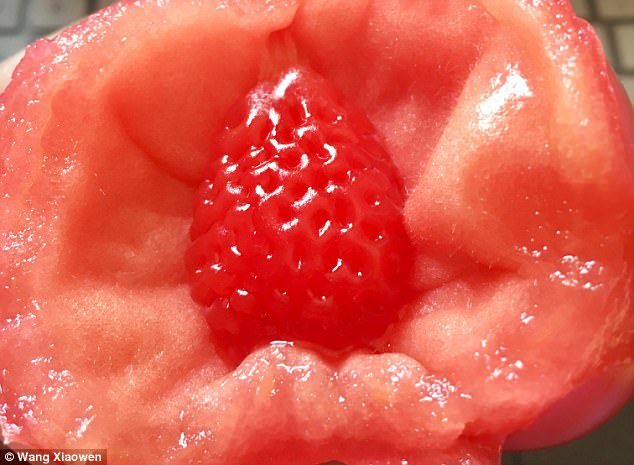 In the post, the man asked: ‘Shall I carry on eating the tomato or not?’


Eventually, Wang decided not to eat the rare strawberry-like core. According to the man, he kept it for a few days before throwing it away. Wang’s post has sparked a wide discussion as to what could have made the fruit look so oddly.

Some web users said the tomato might have been genetically modified while others claimed it could have been the result of cross-pollination. Some even suggested that the tomato could have had a tumor.

Agricultural experts from China Central Television Station said what Wang had seen wasn’t a real strawberry – instead it was a part of the tomato that had ended up resembling a strawberry.

In a Weibo post, China Central Television Station claimed that the tomato could have suffered from lack of nutrients during its growth. It was likely that the farmer had used some hormones on the fruit, which caused it to have a dry, berry-like core.

Apparently, this is not a single case.

Like Wang, a man named Dean Wilson from Illinois, United States, found what seemed to be a strawberry inside a tomato he had planted in his backyard in 2010.

According to experts from the University of Illinois in Knox County, Wilson’s apparent straw-mato was simply a stuffing tomato.


Previous If You Have A Lump In One Of THESE Places, THIS Is What You Need To Know