An employee of Suncor Company digs up unexpected discovery.  Shawn Funk works as an excavator that pulls crude oil from the earth. On March 21, 2011, while Funk is working into the Millennium Mine located about 17 miles north of Fort McMurray, Alberta, he discovered something unusual.

Being in this job for 12 years, Funk had found several fossils but never found anything like this.

The discovery happened on Monday at 1:30 pm. As he dropped his machine on the sand, he found a large lump of dirt with a strange surface and a diamond pattern. When he found this, he stops and gets someone who could help him identify what it was. To seek for help, Funk and his supervisor Michael Gratton has sent pictures to Royal Tyrrell Museum. 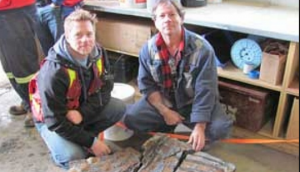 Suncor executive has asked veteran technicians of Royal Tyrrell Museum to help them get it out of the ground. While they are pulling the rock from the ground it fell and shattered. After rock was crushed a110-million-year-old dinosaur fossil was revealed. Funk had made a radical discovery.


As they put the shattered pieces together, they were surprised of what they have found. The bony scales and plates along its top side almost presented a perfect preserved dinosaur. Curator Donald Henderson believes that they found a rare land ankylosaur.

According to the report of CBC News, Henderson said:

“We’ve never found a dinosaur in this location because the area was once a sea, most finds are invertebrates such as clams and ammonites. The last giant reptile removed from this area was an ichthyosaur found 10 years ago. To find an ankylosaur is totally unexpected here. Finding one of these animals anywhere is a rare occurrence.”

The executive director  of the Royal Tyrrell Museum Andrew Neuman also said: “Suncor and its staff deserve a big thank you for recognizing this as a fossil and reporting it to us as quickly as they did,”

While it appears to be like a sculpture, it is a real dinosaur that used lived on earth million years ago. This Dinosaur Mummy which was considered as a horrible creature has changed paleontology for a lifetime.