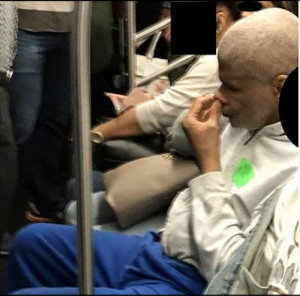 Police said to call them immediately if anyone has any information about the ‘nose picking masturbator’.


The news has gained plenty of reactions from the people. Here are some comment below:

“NY City has the finest Education/Immigration system in the world. How come we can’t get interesting citizens here in Toronto like this gentleman? Besides he is just a Progressive expressing his artistic free speech rights. He is obviously recycling his life essence back through his nose. I am sure Algore does the same thing in one of his mansions. Justsayin.”

“I think we’ve found the one man in America even more disgusting than Harvey Weinstein.”

“Part of his activity here reminds me of Weinstein. Money got him a lot of women and he kind of did the same thing. Maybe not the nose picking.”

“That is so disgusting. Who in their right mind would ever, ever, ever pick their nose in public?! =)”

“Multitasking. Actually men having a finger up their nose and a hand moving around in their underwear (when they are wearing some) is a very common thing in Italian trains.”

“Hate to say it, but Trump has just lowered the standards of decent behavior and class so much that anyone thinks they can do anything and get away with it.”

Next Man Brutally Dismembers And Cooks Up His Transgender Girlfriend