Leroy Jones, the black Chairman of the Essex County New Jersey Democrat Committee, may be terrified of a grizzled old Democrat hack with more chin whiskers than she has manners – but he sure isn’t afraid of any 75-year-old blind Army veteran.

Leroy Jones was awarded The Daily Rant’s Racist of The Year Award in 2014 after he displayed the backbone of wet bathroom tissue as he was cowered into submission by the queen of flagrant white liberal racist supremacy, Belleville Councilwoman Marie Strumolo Burke.

It was proven beyond any question of a doubt that Burke was the voice heard shrieking in the background that the proposed zoning changes would turn her New Jersey town into “an ‘effing’ nigger town.” Not only did the emasculated Leroy Jones retreat away from demanding any action be taken against Strumolo Burke, but he did so with a banana colored pallor. (http://mychal-massie.com/premium/leroy-jones-emasculated-black-democrat-2/) 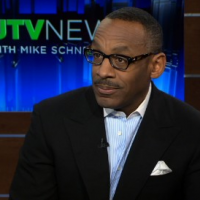 But when it came to a 75-year old blind Army veteran (who also happens to be black), Jones was all aboard the “gangsta” train. Blind Army veteran Bill Graves says Jones viciously attacked and punched him in his sightless eyes because Jones felt Graves had not followed his explicit instructions during the East Orange New Jersey council primary at the beginning of June. Jones however, claims he beat up the 75-year old blind Army veteran because Mr. Graves had allegedly gotten “aggressive” with Jones’ wife as she was checking credentials at a polling site.

So it would appear, Jones’ status notwithstanding, the black Democrat Committee Chairman subscribes to the same method of conflict resolution that the “old school gangstas” employ. Jones, as videotape clearly reveals, beat up the blind veteran.

Here we see the amoral character of those shackled to the Democrat plantation. It is easy to conclude that the Democrat leadership made it clear he was under no circumstances to do anything to impede or embarrass the unethical racist Marie Strumolo Burke because she is white. But clearly there were no such constraints placed upon Jones pursuant to how he handled black veterans who are blind.

The duplicitous prejudice double standards blatantly displayed by the liberal Democrats cannot be overlooked nor denied.

Marie Strumolo Burke can be compared to the modern day equivalent of Ku Klux Klan Democrat political greats like the late Senator Al Gore, Sr. and late Senator Robert Byrd. And like the obedient little puppy he is, Jones sits when he is told and fetches a stick when it amuses his owners.

The aforementioned notwithstanding, the question that isn’t being asked is why did it take until July 9, 2015 for this story to break when the incident took place on June 1, 2015? Was the silence to ensure Democrat victories? After all, would the voters have looked favorably upon yet another racially charged incident after the racist statements made by Strumolo Burke last year? Who are Jones and/or Democrat leadership paying off to prevent Jones from being charged with a felony juxtaposed to being charged with a misdemeanor? When did ABC7 New York news find out and (why) did they wait to break the story?

This is politics; and nothing of this magnitude stays hidden for a month. I can see no plausible scenario that someone in the media was not aware of this incident. Waiting until a month had passed allowed for the race results to be finalized.

Another thing these Essex COunty, New Jersey incidents prove is the depth of constraint blacks live under in the Democrat Party. The Republican Party is comprised of among the most fragile, craven. feckless, spineless establishment, and least trustworthy so-called faux representatives I can point to, (and I say that as a Republican), but the Democrats for all of their bravado and a Kenyan-American in the White House, are as transpicuously racist as they are known historically, including today.

Democrats are good at pretending not to be bigoted racists but any black who doesn’t follow their prejudiced directives very quickly experiences the wrath of leadership. We witnessed this when Al Sharpton initially gave ambivalent support for California State Supreme Court Justice Janet Rogers Brown to be elevated to the DC Circuit Court of Appeals, and some three hours later he was publicly singing a completely different tune. It was clearly understood that he had been severely chastened by leadership for daring to not do as he was told. It is evidenced by how embarrassingly “puppy dog” obedient the Congressional Black Caucus is to Democrat leadership.

And so it is with Leroy Jones. He is a disgrace on every quantifiable level of integrity there is. He tucked his tail and cowered in the aftermath of Strumolo Burke’s racist outburst going so far as to even work for her reelection.

And then even more stunningly he physically assaults a 75-year old blind Army veteran by deliberately punching the blind veteran in his face and eyes.

Is that what leadership has come to in America? The answer of course, is, yes it is. And it is not just Democrats, both parties are boorish caricatures of what our Founding Fathers intended.

Next She Was Ashamed And Tried To Hide From The Public, But She NEVER Expected This