Hillary Clinton said Tuesday evening that she will support Vermont Senator Bernie Sanders if he wins the party’s nomination in 2020. Every day, it’s looking more likely that he will, even though Bernie insists Warren can’t win because she’s a woman, and Biden is up to his ears in a quid pro quo scandal of his own.

Hillary Clinton is still angry with Bernie for saying that Elizabeth “Pocahontas” Warren doesn’t have a 1024th chance in the happy hunting ground, simply because she’s a woman. Hillary snarls back, “I got 3 million more votes than Trump.” She still lost. Clinton hates Donald Trump even worse. “The number one priority for our country and world is retiring Trump,” she cackles.

Nobody likes Bernie, she says. He “was in Congress for years. He had one senator support him. Nobody likes him, nobody wants to work with him, he got nothing done,” a recent Clinton documentary reveals. “He was a career politician. It’s all just baloney and I feel so bad that people got sucked into it.” She’s mad now that he wouldn’t bow down and kiss her ring until the last minute in 2016.

“He could’ve (endorsed me earlier),” Clinton said at the time. “He hurt me. There’s no doubt about it, he hurt me.” 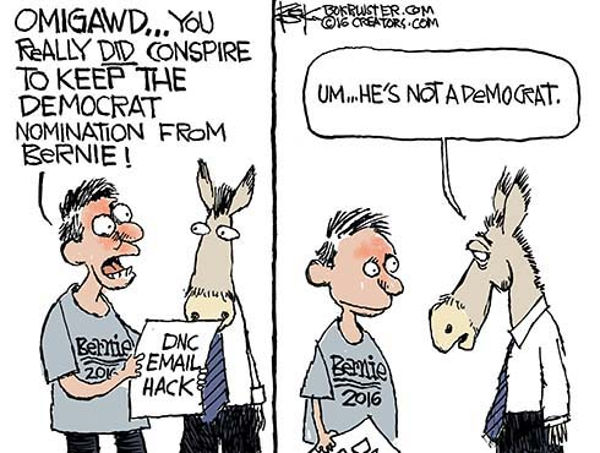 Bernie was still seething back then, after finding out that she hijacked his share of the DNC campaign fund. He settled for a beach house and they parted friends. For his part, Bernie is “sorry that Hillary Clinton is re-running 2016.”

Another thing that Bernie is sorry for is that one of his staffers put out an unauthorized opinion article referring to Joe Biden’s “corruption problem.” The one that Democrats in the impeachment trial keep saying he doesn’t have. He’s sorry it got out, but it’s still true.

Biden’s crack-head son, Hunter Biden, was given a very cushy job with a Ukrainian Oil company. Quid Pro Joe withheld aid to the Ukraine until they knuckled under to his extortion and removed a prosecutor investigating the company. Every time the subject comes up at the impeachment trial, Democrats start screaming it’s nothing but a distraction. They think nobody will notice they are trying to impeach Trump for nearly the same thing.

The article was written by Sanders staffer Zephyr Teachout and published on Monday in The Guardian. It argues that Biden’s “record represents the transactional, grossly corrupt culture in Washington that long precedes Trump.” Things got even worse when speechwriter David Sirota reprinted it in his “Bern Notice” newsletter email.