When a madmen is on the loose, brave people use what they have to get the job done…

Breaking news has surfaced of a Syrian Muslim refugee wielding a machete, hacking one woman to death and leaving at least two others injured. However, instead of running for cover and pleading for their life in a gun free zone, a fed up, quick-thinking citizen decided to take action.

It’s no surprise that European countries with the highest influx of Muslim migrants and the strictest limitations on the criticism of Islam are subsequently the most plagued by Islamic terrorism. With the help of German Chancellor Angela Merkel and her leftist lap dogs, Germans are being picked off one-by-one and punished to the fullest extent of the law if they speak out.

In what surely would have been another Islamic massacre on the streets of Germany, 21-year-old Syrian asylum seeker brandished a machete and began hacking bystanders in Reutlingen on Sunday around 4:30 p.m. According to German newspaper Bild, the unnamed refugee, who is well-known by local police, hacked the female employee of a kebab kiosk to death and brutally injured two others before a local hero decided to do something.


The unidentified driver of a BMW saw the crazed jihadist slashing onlookers when he stepped on the gas pedal and crashed his vehicle directly into the Syrian hacker. The driver hit the man with such force that he was incapacitated but not killed, allowing police to arrest him. 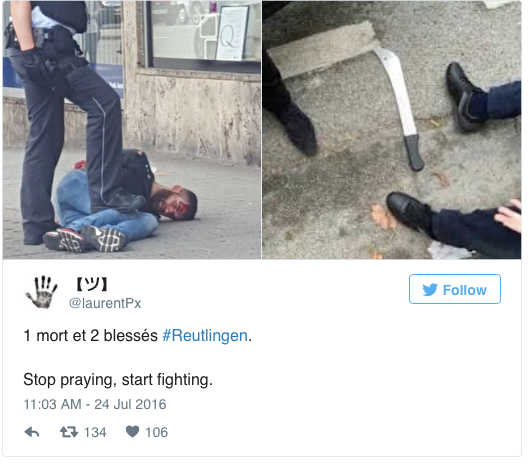 “The perpetrator was completely out of his mind. He even ran with his machete behind a patrol car,” an eyewitness said. “A BMW driver then hit the gas and ran over him. He then lay prostrate on the ground and did not move. ”

According to Fria Tider, the bearded refugee lay bloodied and badly injured on the ground as police placed him in handcuffs and hauled him away.

Of course, the driver probably saved lives and prevented further injury to his fellow countrymen, but his method of action isn’t anything new. In fact, it is eerily the same tactic to which many have been forced to resort in the country with possibly the most Islamic attacks on innocent civilians per year.