Emma Tapping shared a photo of her Christmas tree on social media and couldn’t believe the backlash she got. I’m not quite sure why she is so surprised, she does the samething every year and gets the same reaction. After having a personal encounter with her, she really believes she is doing right by her kids and doesn’t care what other people think. Unfortunately, for not caring what anyone thinks, she sure does spend a lot of time defending herself.  Mom claims that she searches for presents all year long, looking for bargains, discounts, and deals. At one time she found a box of LEGOs for 40 percent off. Nevertheless, the total costs of the presents exceeded $2,000 and Tapping has no plans to EVER stop. Imagine having an entirely new generation of entitled snowflakes because some parents thought this was pretty amazing. 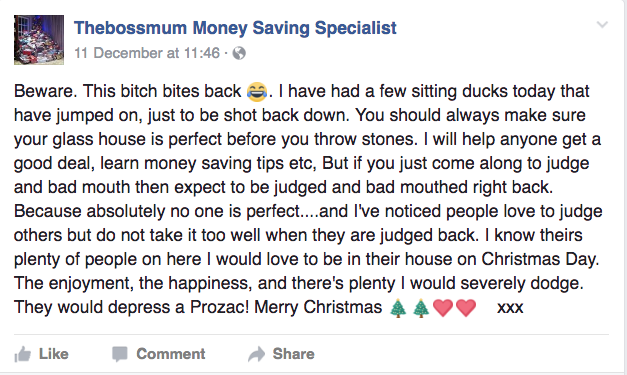 There was even a 16 year old girl on her Facebook feed I ran into that called another mother a “high schooler” because she voiced her concerns. Imagine that, a 16 year old who thought this was the best idea ever and Tapping absolutely LOVING her comments. So, you can already see where this all went. Nowhere.

Tapping was accused of “bragging” and of being “materialistic.” She was also called downright “disgusting” for spoiling her children. The tree housed more than 300 gifts that piled high, nearly cloaking the entire thing.

Tapping says, “I LOVE christmas I LOVE spoiling my kids in the festive season and I work damn hard to make sure it is every bit as amazing as it can be.” Which may be true. However, let it be known that she is trying to run a business or gain attention at the least, for her money saving capabilities. It would almost seem like she does it on purpose JUST FOR THE REACTION she already knows she is going to get.

Tapping sat down with Inside Edition and a few other media outlets, and confessed that her daughters get 85 presents each and her son receives about 30. “I wouldn’t let anybody tell me how to spend my Christmas with my children,” she said. “Who doesn’t want to make their child smile at Christmas?”

What do you think? A bit too far or just the right amount?

Next NEW DEVELOPMENT: All 10 ELECTION HACKS In the US and Georgia Have Been TRACKED BACK to Source!