Durham will have some powerful new help on his team starting January 27. “I am thrilled that Sarah Karwan will lead our criminal division. “Sarah has done it all, prosecuting violent criminals, drug traffickers, financial fraudsters, corrupt public officials, and a wide variety of other wrongdoers.” That should have her primed to take on such targets as James Comey, James Clapper, John Brennan, and Andrew McCabe.

Robert Mueller’s witch-hunt eventually morphed into the current impeachment circus. Not only did they try to steal the last election, Deep State Democrats are trying to do it again. Durham was appointed to run a Department of Justice probe into how it all got started. Thankfully, his investigation is totally separate from the one done by Horowitz, who dropped the ball, most say.

“He’s looking at other agencies and departments and also private actors,” Attorney General William Barr explains. “It’s a much broader investigation. He is looking at all the conduct both before and after the election.” 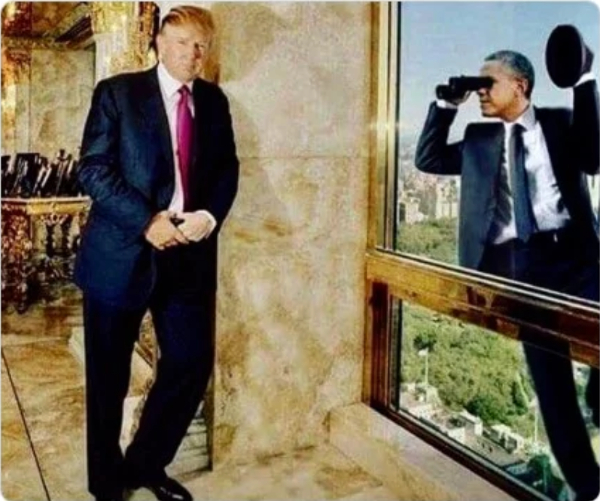 As soon as Donald Trump announced his bid for the White House, Barack Obama and his cronies decided to hijack the 2016 election by spying on Trump. Ever since the Watergate days, everybody knows that’s totally illegal. What Obama did makes Watergate look like the third-rate burglary it really was. First, Obama needed an excuse.

Through cut-out attorneys, Hillary Clinton and the Democratic National Committee hired Christopher Steele. His “dirty dossier” alleged “treasonous activities” that were completely made up. The Federal Bureau of Instigation used that to get a wiretap warrant from the FISA court. It was only supposed to target Carter Page but a lot of other big fish got hauled into the net along the way. Spying on Carter Page was effectively the same as spying directly on President Trump, both before and after the election.

The illegally obtained warrants allowed the FBI to listen in on Page’s communications “with people in the Trump campaign,” including intercepted emails “concerning campaign related matters.” A lot of emails were accessed. They were well aware of “the possibility that the FISA collection would include sensitive political campaign related information.” That’s exactly what they were looking for. The FBI thought that Page was involved in a policy change “and the team was hoping to find evidence of that in their review of the FISA collections of Page’s email accounts.”

Another FBI no-no is entrapment. They used undercover informant Stefan Halper to feed Page “unsolicited (and potentially illegal) advice concerning campaign strategy.” Halper wore a wire to a meeting with Page in August of 2016, where he wondered “if the Trump campaign could access information that might have been obtained by the Russians from the DNC files.” Where he crossed the lines was by suggesting Page urge the campaign to do something illegal. “We would have used [it] in a heartbeat,” he suggested.

That “suggestion” carried a whole lot of weight behind it. Halper is a respected expert in campaign management. That’s the whole reason the FBI reached out to him in the first place. They were well aware he “had been affiliated with national political campaigns since the early 1970s.” Buried within 163 pages of transcripts from that meeting was “the exculpatory information Page provided Halper that the FBI failed to include in the FISA applications.”

Halper spied on another Trump campaign official “off the record” at the same time. When Halper met with Sam Clovis on September 1, 2016, wearing a wire, “Halper posed several questions about sensitive campaign strategies.” What he learned was that the plan was “give people a reason to vote for [Trump], not just vote against Hillary,” along with “additional comments about the internal structure, organization, and functioning of the Trump campaign.” They also discussed sensitive topics like “an internal campaign debate about Trump’s immigration strategy, efforts to reach out to minority groups and the impact of those efforts, and the campaign’s strategies for responding to questions about Trump’s decision not to release his tax returns.”

The FBI had no warrant for George Papadopoulous but they still had Halper. “Halper recorded conversations with Papadopoulos in September 2016 and October 2016.” Then the bureau arranged for “Joseph Mifsud to feed Papadopoulous fake ‘intel’ about Russia having dirt on Hillary Clinton, then arranging for a ‘friendly-foreign government’ representative, Australian diplomat Alexander Downer, to prompt Papadopoulos to disclose this supposed inside track on Russia collusion.”

In addition to undercover moles, the FBI planted agents in security meetings with the transition team after the election. “The FBI viewed the briefing of candidate Trump and his advisors as a possible opportunity to collect information for the Crossfire Hurricane and Flynn investigations.” Horowitz also reported incidents well beyond Trump’s inauguration. “While the specifics of those CHSs’ positions were redacted, the IG noted that in March 2017, one CHS provided his FBI handling agent ‘five sets of documents on multiple topics.'”

Next Muslim Teacher Calls For DEAD AMERICANS, Texans Give NASTY Surprise In Class The Next Day