Like millions of other law abiding Americans, Matthew Halleck has chosen to exercise his second amendment rights and in doing so, he felt it is important to protect his two daughters in every possible way that he can.

He [legally] carries a concealed firearm each day, including when he drops his young daughters off at school, while being careful not to violate any state laws that forbid the carrying of a firearm in a school zone in the process.

Before anyone  begins to freak out about the 1,000 foot federal “gun free zone” around schools, that federal law exempts people who hold a carry permit (see Exceptions to the Gun-Free School Zones Act). 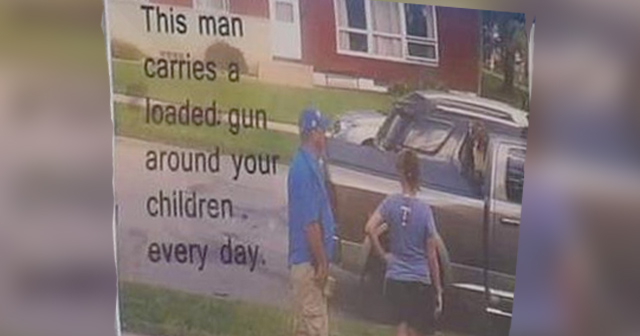 However, it comes as no surprise that logic isn’t good enough for one anti-gunner or for that matter, any of them. According to KAAL,..


But Matthew is no longer the only one who knows he’s carrying a gun. Recently a sign went up in a front yard across the street from the school. It has Matthew’s picture on it and reads, “This man carries a loaded gun around your children every day.”

“Since we don’t have a way to stop him, we felt it was important to notify the neighborhood and the parents that there is an armed man in their presence,” said Kimberly Edson, a Rochester resident who put the sign up. “The first couple days of school he had it very visible, we saw it and were quite concerned,” she said.

Kimberly called the police the day the picture was taken, but they said Matthew has a legal right to carry off school property. Matthew also contacted authorities concerning the sign, and while they briefly took the sign down, it was eventually determined that Kimberly was also breaking no laws. “He has a 2nd Amendment right to carry the gun, I have my 1st Amendment right to say that I don’t like it,” said Edson.

We also have our 1st amendment right to tell this anti-gun liberal to mind her own damned business.

We find it very hypocritical that should a criminal burglarize her home, who’s she gonna call? That’s right, you guessed it. She’s gonna call the police, you know…the men and women in blue who carry guns.

Does this misguided woman do the same when law enforcement is patrolling the neighborhood with guns? Somehow I doubt it because people like her harbor the idea that only the police and military should be allowed to have guns.

For those of you who have watched the movie Schindler’s List, you know exactly how well that turns out for those who are disarmed and left at the mercy of the criminal element as well as the government. Seeing as how the lines have been blurred, it’s safe to say that in this day and age the criminal element and the government are one and the same.

Next Obama shows up for campaign appearance. Audience bails.