The gun ban crowd is pushing HB 650, a bill that will put you in jail for up to a year for selling a gun to a friend or neighbor.

That’s right, under the provision of HB 650 you can’t even dispose of your private personal property without going to a licensed firearms dealer. 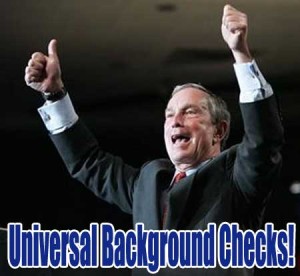 This bill will criminalize commonplace activities you probably don’t even think about. Ever loan your rifle to a friend on a hunting trip? Ever let a friend try out one of your guns at the shooting range? If HB 650 is passed, these are the kinds of things that could land you in jail!

HB 650 is so broad that any transfer that is not completed by a licensed dealer subjects the transferor to the penalties of a misdemeanor!

If you think that’s bad, this new bill — House Bill 650-FN –– would set the stage for putting the names of New Hampshire gun owners into a national gun registry. It would do this by requiring that virtually any gun transaction in New Hampshire –– private or commercial –– be subject to a Brady Check.

Thus, if you lived in Stark or Fitzwilliam and wanted to sell your gun to your lifetime next door neighbor, you and he would have to take a day off and drive to a federal firearms licensee.

Once you got there, you might very well face the dirty little secret of the Brady Law: The system is frequently down for long periods of time — sometimes an entire weekend. And 8% of all inquiries result in “false positives” – normally because your name is similar to someone else’s.

Now, under the language of the Brady Law, it is legally permissible for you and your neighbor to take a day off three days later and drive back to the firearms dealer, accompanied by your neighbor. The problem is this: Most false positives never go “green.” Most dealers won’t sell a firearm unless the FBI transmits a “green.” And most people who try to get the FBI to correct its records are given the brush-off.

But that’s not all: Recently, BATF has gone into gun dealers in connection with its annual inspection and demanded to be allowed to copy all information from the dealer’s bound book and 4473’s — thus compiling a de facto gun registry.

So the drafters of House Bill 650-FN claim that they prohibit a state or local firearms registry? Surprise! BATF is not a “state or local agency.” And it doesn’t consider its list of all gun owners to be a “registry.”

Consider how this bill would have failed to prevent Newtown (stolen gun), Aurora (passed background check), Tucson (passed background check), and practically every other modern American tragedy. This bill wouldn’t make anyone safer, it’s just another cynical attempt by Bloomberg-backed gun-grabbers to marginalize gun-owners, stigmatize gun ownership, and pave the way for the elimination of your gun rights.

Here’s what you need to do to help, HB 650 is scheduled for a hearing in the House Criminal Justice and Public Safety Committee on Thursday, February 19 at 9:00 AM. The hearing is scheduled to be held in Room 201 in the Legislative Office Building. Please try to attend this hearing and sign in to oppose HB 650. Please also call and email the committee members and urge them to vote HB 650 “inexpedient to legislate” (ITL).

Click here for a list of all members of the House Criminal Justice and Public Safety Committee. When you go to the committee webpage, you will be able to click on each committee members name to send a personal email.

HB 650 is sponsored by some of the most anti-Second Amendment, anti-freedom idealogues in New Hampshire.

Please contact the committee members and bill sponsors to let them know that you strongly oppose ANY attempt to prohibit the private sale of firearms in New Hampshire. You need to be polite but firm when you explain to these legislators that HB 650 might make them “feel like they are doing something” but in reality nothing needs to be done. There is no proof, anywhere that there has been any problems with allowing law abiding, peaceable, state residents to sell or trade firearms (that they lawfully own) to one another.

Private parties cannot order firearms through the mail or UPS, only licensed dealers can do that. HB 650 only addresses face to face private sales.

The content of HB 650 comes straight from the play book of former New York City Mayor Bloomberg and his pals, Gabby Giffords and her anti-gun husband Mark Kelly. They are trying to make the rest of America like the “crime free” mecca that Mayor Bloomberg ruled for 12 years. Not!

Don’t be fooled, HB 650 is part of a coordinated national effort and it is just the beginning. If successful they will push for sweeping gun and magazine bans and bans on concealed carry!

Please also let these legislators know (because they are most likely ignorant about firearms) that dealers are licensed, but private parties are currently free and should remain free to dispose of their property as they see fit.

Thanks for your support!

Next Anti-Gun Nuts Vandalize ‘NOT a Gun Free Zone’ Signs