The New York Times reports that the ATF’s proposed AR-15 ammo ban has been in the works for over three years.

The proposed ban, previously reported, would bar law-abiding citizens from purchasing popular M855 ammo for their AR-15s by re-categorizing the ammunition as “armor piercing,” then outlawing it under the auspices of the Gun Control Act of 1968 (CCA).

The GCA regulations only apply to handguns, but Obama’s ATF is citing the existence of AR-15 pistols to justify a crackdown on 5.56 ammo compatible with pistols and rifles alike.

According to the NYT:

The proposal by the AFT to reclassify the rifle ammunition started more than three years ago, before the [Sandy Hook Elementary attack], and included meetings with members of the firearms industry [who protested the arbitrary rule change], advocacy groups and law enforcement officials.

Those three years have culminated in the current ammo ban proposal, and “after the 30-day comment period expires on March 13… Attorney General [Eric Holder]” will decide whether the ban stands or falls. 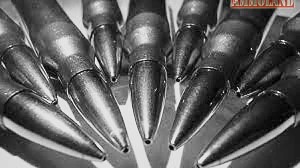 Previous Will Obama be Forced to Swallow a Repeal of the AR-15 Ammo Ban?

Next [VIDEO] ISIS Raises Flag Only Seconds Before Being Decimated