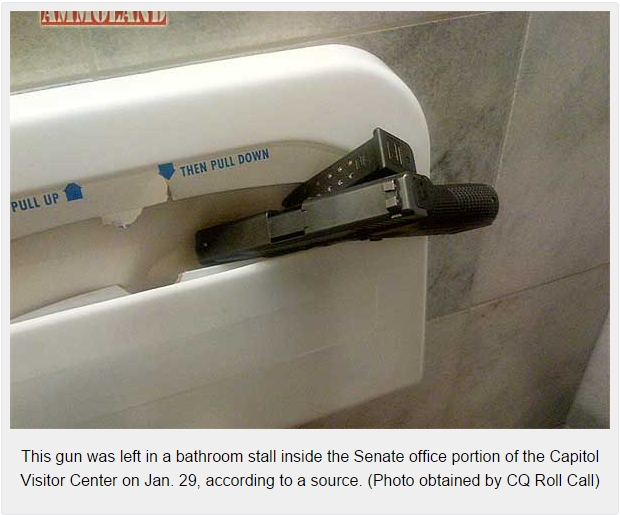 It has recently come to light that, on at least three separate instances this year alone, members of various political security details have accidentally left their pistols in public bathrooms of the Capitol Visitors’ Center, Capitol Police Headquarters, and other government buildings in DC.

All three pistols were inadvertently discovered later, in one case by a young child! Happily, all three were safely recovered without further incident.

However, the foregoing were only the three we know about. Since all such embarrassing incidents, far from being honestly disclosed, are instantly covered-up and swept under the rug, there may well be more that have never seen the light of day!

Of course, we’re all guilty of foolish gaffes now and then, and we suffer the consequences, and should!


The point here is that, while we “ordinary” Americans (including veterans) are sanctimoniously lectured by self-righteous politicians and career bureaucrats that we’re too stupid to own guns and should be punished severely whenever we commit even the slightest indiscretion, when they do the same thing, the whole incident is immediately covered-up. There are no consequences, much less “punishment,”, and they all get promoted!

Why are our sins so permanently unforgivable, while theirs are automatically washed away without a trace?

Does that smack you, as it does me, of arbitrary power, an unspoken double-standard, and pseudo-aristocratic arrogance?

Why does “individual responsibility” apply to us, but never to them?

“The national budget must be balanced. Public debt must be reduced. Arrogance of the various authorities must be moderated and controlled… People must, once again, learn to work, instead of living off the honest labor of their fellow citizens.” ~ Marcus Tullius Cicero, 55 BC