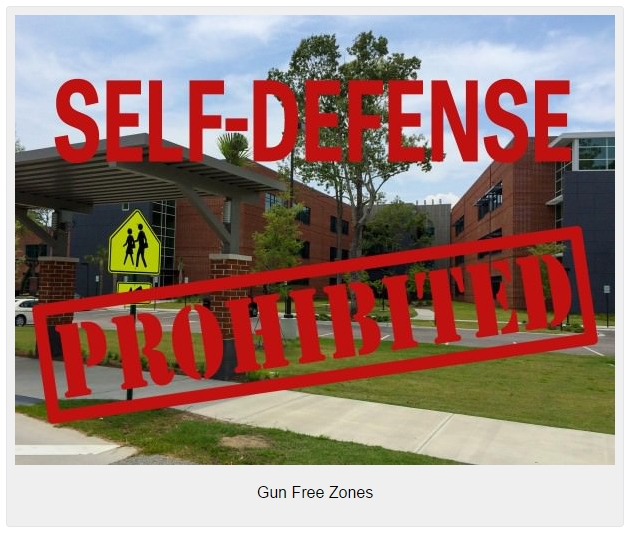 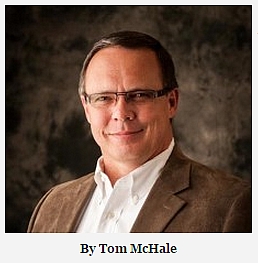 If you’re reading this, odds are about the same as Evander Holyfield whoopin’ Mitt Romney in the ring that you already know Gun Free Zones suck.

Seriously, how much thought does it take to realize that people intent on doing harm could give a rat’s @ss about a flag in the ground claiming a Gun Free Zone?

This line of thought is a unicorn fart not worthy of inclusion in the latest Al Gore documentary about the impact of roasting marshmallows on climate change.

Heck, that idiot who shot up a movie premier in Aurora, Colorado bypassed numerous closer and more densely populated movie theaters to find one with a Gun Free Zone sign on the door.

More recently, and closer to home for me, another demon incarnate right here in South Carolina elected to bypass his primary target of the College of Charleston because there was a risk of confronting armed security. And those are just two examples. Of all the mass murders in the past 50 years, only two have taken place in areas where guns were not specifically prohibited. Gun Free Zones attract sick, evil sociopaths like politicians to a camera. The thought of having absolute control over defenseless victims is appealing to those disgusting and twisted souls.

I’m frustrated, depressed, and nauseated by the senseless deaths caused by this “feel good” concept of Gun Free Zones. 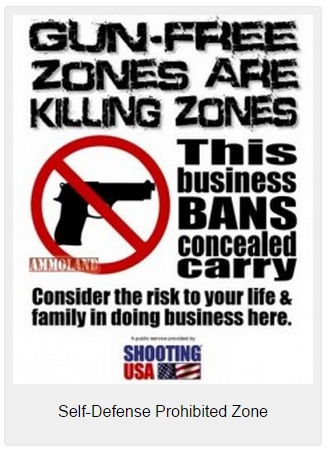 On a different front, the career marketing strategist side of me is also affronted by Gun Free Zones. Not the idea, but the description. Yes, we all know that “Gun Free Zones” equate to places where criminals have free reign. But we’re not the ones that need convincing in the broader public relations campaign about this issue.

If you step back and assume the thought process of average Joe and Jane TV Watcher, who do not spend the hours we do researching facts and considering the true ramifications of pleasant sound bites, you might think that “Gun Free Zones” sound pretty good. Heck, who can argue against the idea of the impossibility of violence? Of course, we know better, but only because we’ve plunged deeper into what that phrase truly means.

In our nanosecond attention span Tweet-A-Gram society, we need to think of how to best communicate our message in ways that low-interest Reality TV show watchers can easily digest. If we only get five words to communicate our message, “Gun Free Zones Are Bad!” is not our winning scenario because the first three words of that sentence sound pretty good on the surface.

Heck, if those three words represented reality, I would be all for hanging out at a place where I had a zero percent chance of getting shot.

Let’s consider just one example. To the broader non-analytical community of voters, making a school a Gun Free Zone sounds like a great idea. To the uninterested and unenlightened, guns are associated with violence. They don’t understand that guns are even more closely associated with the concept of self and family defense.

When we try to fight the concept of Gun Free Zones in schools, we’re having to use language that advocates for guns in schools. Let that sink in for a second. We’re telling a large population of low-information voters, who know little about the self-defense meaning behind our words, that we want guns in schools. Those are not winning public relations words.

Words are powerful, especially when our opponents choose to hear only a couple of them to represent our entire viewpoint. Do we really want guns in schools? Well, sort of, but that’s not the most accurate description of our intent.

Let that sink in too. Gun Free Zones aren’t really about guns. They are about a stripping of self-defense rights in arbitrarily defined areas. 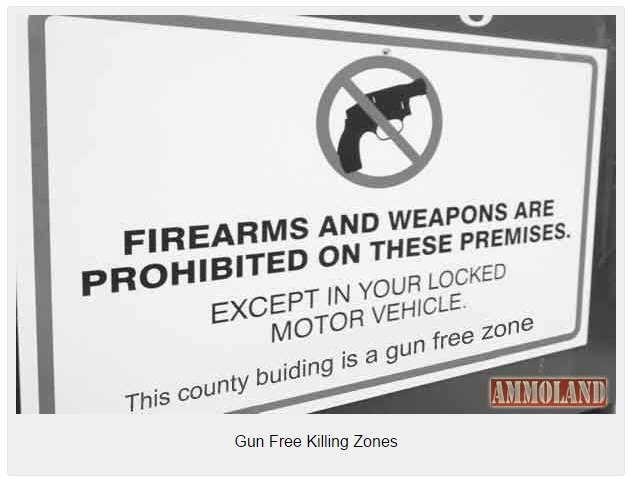 Why are we focusing on inaccurate words to communicate our point? We’re falling into the trap of arguing against our own logic. When evil dude “A” shoots innocent guy “B”, we’re the first ones to say not to blame the gun. A gun is only a tool used in the deliberate action by an individual. However, when we argue the right to protect ourselves and loved ones in public places, we argue on behalf of the object when we use terms like “Gun Free Zones.” We’re arguing for the legality of an object, not a change in behavior.

To illustrate this concept, think about different phrases that we might use instead of Gun Free Zones.

From this day forward, I’m going to use better language to communicate this concept to the uninitiated. I’m going to use the phrase Self-Defense Prohibited Zones instead of Gun Free Zones. Self-Defense Prohibited Zone is clear and hits directly at the meaning we want. Who in their right mind would advocate for the prohibition of self-defense in any place, especially a school?

Think about the mental picture the phrase Self-Defense Prohibited paints.

The term “self-defense” already communicates that there is an aggressor in the scene, and an innocent is in the position of defending themselves.

The word “prohibited” brings a very strong image. “Prohibited” often carries the force of law. It’s intense and implies that a powerful authority actively prevents an action. It doesn’t imply meanings like “discouraged” or “requested.” It’s rigid and inflexible.

Combining “self-defense” and “prohibited” immediately presents a very disturbing and uncomfortable picture. It communicates a direct assault on innocence.

But what about guns?

Therein lies the beauty of using better language. The conversation is no longer about guns; it’s about a fundamental right to self-defense. It’s about the inarguable concept of protecting children. In our school example, the conversation is now about how stupid it is to strip away someone’s ability to protect children.

When we clarify that no place can be a Self-Defense Prohibited Zone, it’s inherently obvious that you can’t strip a lawful gun owners right to carry. It’s no longer about the tool or object, but about the right to self-protection. Once it’s been established that you have the right to self-protection, the debate about the tools is largely irrelevant. It’s about protecting kids, not about bringing guns into schools. When we advocate for police presence in schools, no one worries about the fact they have guns, right?

The pen is mightier than the sword as words influence the masses. Now, more than ever, in our low-information and high-distraction society, it’s more important than ever to choose our words very, very carefully.

What say you? Could you imagine someone making an effective argument against banning Self-Defense Prohibited Zones?


Previous Macy's Learns A Hard Lesson When Messing With Trump

Next No, Jimmy Carter, Jesus Probably Wouldn’t Be a Fan of Gay Marriage