“Who really thinks that a top-down approach to controlling weapons will be any more effective than Prohibition was in the early 20th Century or the war on drugs has been today?” — GOA’s Erich Pratt in an upcoming USA Today oped 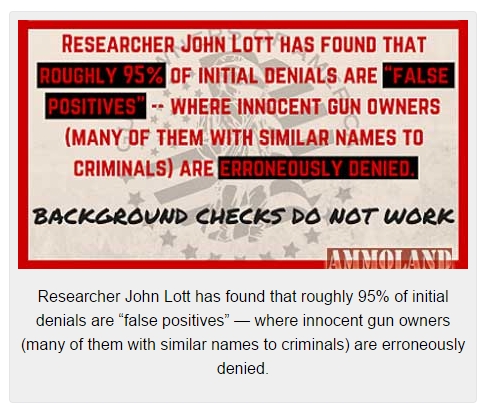 The Obama Administration is redoubling its efforts to clamp down on your Second Amendment rights.

The FBI Director recently said that a flaw in the NICS system allowed Dylann Roof to purchase the gun he used to kill nine people in South Carolina.


In the minds of the collective Left, this means we “need” more money and more names to be fed into the NICS background check system.

But as GOA’s Erich Pratt argues in a USA Today oped that will be published in their Pro-Con debate page: .

“The entire background check system is flawed.  Not only is it unconstitutional — and disarming many law-abiding citizens — it’s failing to keep guns out of the criminals’ hands and is not keeping people safe.”

Like so much of what Obama and the lapdog press attempt, this campaign to infringe upon more gun owners’ freedoms takes a central fraudulent premise and repeats it until it becomes a national mantra.

The Big Lie:  More gun control will stop bad guys from getting guns.

After Newtown, Obama’s fraud was that a young man who stole his guns would have been deterred if he had been required to get a background check.

With Charleston, everyone knows the killer underwent a background check, which was unable to find anything disqualifying about him.

So the new post-Charleston Obama Fraud is that the FBI, if it had a lot more money for gun control, could have found something to stop Roof from getting a gun.

The problem is that there was nothing to be found.

Roof had a misdemeanor conviction, but, barring domestic violence, that wasn’t enough. Roof had been arrested on a felony drug charge, but apparently, he hadn’t been indicted.

So the FBI is arguing that if it had more money, it would have discovered that Roof was “an unlawful user of or addicted to any controlled substance…” [18 U.S.C. 922(d)(3)].

This archaic and little-used provision has largely gone into the trashcan for a reason: absent the conviction of a crime in a court of law, how is the government to know if one is using a controlled substance unlawfully?

The power to enforce such a vague law would necessitate an immense increase in the police power of the state.

Right now, users of marijuana for medical purposes — by those holding a prescription from a doctor — are deemed ineligible by the BATFE to own a firearm.  If this federal ban were vigorously enforced, under the so-called NICS Improvement Act, the FBI would have to demand that every lawful medical marijuana user in the country be put on the FBI list.

And, once the FBI is forced to officially take notice that millions of Americans are openly violating federal law, the status of those lawbreakers becomes — shall we say — dicey.

Already, the NICS background check is being used to keep thousands of honest gun owners from purchasing firearms.

Researcher John Lott has found that roughly 95% of initial denials are “false positives” — where innocent gun owners (many of them with similar names to criminals) are erroneously denied.

Thus, the government background check becomes the “kiss of death” for a constitutionally-protected gun sale. Many Americans who are legally entitled to purchase a firearm are denied that right because of the similarity of their name to someone else’s — coupled with the FBI’s antipathy toward guns (in anyone’s hands but their own).

Once again, we see both the ineffectiveness and the insatiability of gun control. To the extent that anyone is allowed to own a gun, that becomes the next “loophole” for the gun-haters to attack.

ACTION:  Urge your two Senators to OPPOSE any and all efforts to increase funding for the FBI NICS system (H.R. 2578).  No amount of background check funding will stop determined criminals from getting guns — rather, they will only infringe upon and register gun buyers.