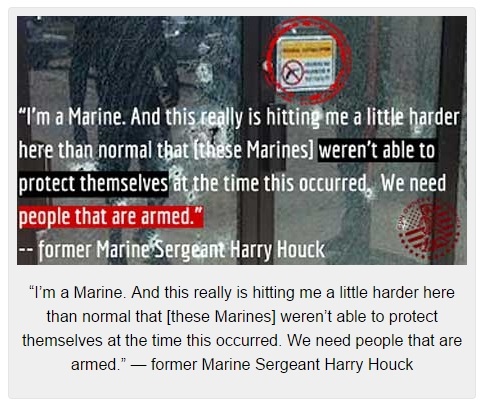 Once again, a tragic shooting — this time at the two military locations in Chattanooga, Tennessee — has gripped the nation.

And here at Gun Owners of America, our thoughts and prayers are for the families of the victims.

Sadly, the Brady Campaign announced — just hours after the shooting — that this massacre requires additional gun control. They went so far as to say that, “We owe it [“it” being more gun control] to the men and women at our military installations.”

Really? Is that what our servicemen are clamoring for? Hardly. What a disgrace to the men and women who have dedicated their lives to protecting our country.


Gun Owners of America has been working with several congressmen on Capitol Hill to introduce legislation to repeal the gun ban on military bases.

And we have good news! Rep. Scott DesJarlais (R-TN) plans to introduce a bill early next week.

And the office of Rep. Duncan Hunter (R-CA) — a former Marine himself — has told GOA that he will be introducing a bill to allow military recruiters to carry firearms.

On the Senate side, GOA is working with Senator Steve Daines (R-MT) on similar legislation.

We will provide you updates as things develop.

It is imperative that this legislation get introduced and tacked on to a must-pass bill, because the sad truth is that more lives will perish if Congress does not repeal the ban on service members carrying guns.

“Our servicemen are sitting ducks at every military base in the country,” said GOA Director of Communications Erich Pratt. “How is it that a concealed carry holder shopping at Wal-Mart has more rights than our soldiers who are also trained with firearms?”

Obviously, military bases are not the only gun-free zones that must be repealed. So GOA is working to repeal the Gun Free School Zones Act and other gun bans.

All of these efforts are just part of the gun control “fabric” that needs to be torn apart, one piece at a time, and tossed into the trashcan of history.

We recognize that the Second Amendment protects our God-given right to own and carry firearms for protection. But if we don’t repeal these infringements of our Second Amendment rights, then good people will end up behind bars for merely possessing guns for self-defense.

That cannot be allowed to continue. Stay tuned for future alerts on this matter.

ACTION: Click here and urge your Representative to become an original cosponsor of both the DesJarlais and Hunter bills.

Please note that there are still no numbers assigned to these bills, as they are expected to be introduced next week. However, by emailing your Congressman now, you will be helping Reps. DesJarlais and Hunter to get more original cosponsors.

Next FBI: Alleged Chattanooga Gunman Purchased Some Of His Guns "Legally"