The term “sporting purpose” is embedded throughout U.S. gun control laws, and its use is a violation of the Second Amendment.

That has been my position for decades. My brother Chris raised the issue in a speech before the Gun Rights Policy Conference some three years ago, and our dad Neal Knox was making an issue of the language in the 1980s.

The “sporting purpose” language has been a plank in federal gun laws dating back at least to the National Firearms Act of 1934. The 1968 Gun Control Act, down to its current incarnation, institutes broad restrictions and prohibitions on a variety of firearms and ammunition, then exempt items that are deemed to be “particularly suitable for sporting purposes,” or are primarily intended for “lawful sporting purposes.”

As Dad used to say, “the U.S. Constitution and the Bill of Rights are not about Americans’ right to keep and bear sporting goods.”

The right to arms enumerated in the Constitution is about self-defense and self-determination, not about trap and skeet or taking game. It also sticks in the craw that much of the actual languages in our gun laws, including the “sporting purpose” clauses, appear to have been lifted verbatim from the German gun control laws of the late 1930s, during the run-up of Nazi power.


We all know how well those laws protected Jews, Gypsies, homosexuals, and other minorities.

So, for over 30 years we have been calling for legislation to remove “sporting purpose” exemptions and repeal or change the laws so that the exemptions are unnecessary. Finally, on June 10, Representative Rob Bishop (R-UT) introduced H.R.2710, titled the “Lawful Purpose and Self Defense Act” which, if passed and signed into law, would be the most sweeping reform of the Gun Control Act since Neal Knox’s gun de-control plan that became the Firearm Owners’ Protection Act of 1986. 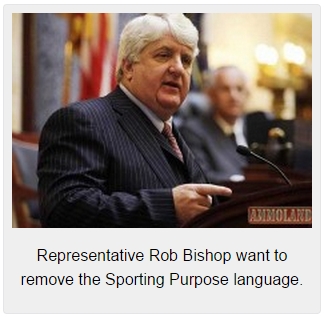 Bishop’s bill accomplishes major reforms by simply swapping out a few words and phrases in the current law. The core involves replacing the idea of “sporting purposes” with the idea of “lawful purposes.” We’re thrilled to see it finally introduced. There is simply no room in the Second Amendment for the words “sporting purpose.” We’re also pleased with the timing, as it gives gunvoters a rallying point and presidential and congressional candidates something unambiguous to support or oppose leading into the 2016 elections.

The bill specifically addresses the problem of BATF redefining rifle ammunition as armor piercing handgun ammunition, by replacing “may be used in a handgun” with the more precise “designed and intended by the manufacturer or importer to be used in a handgun.” It goes on to clarify that not only are rifle and shotgun projectiles exempted, but also handgun projectiles that are “designed and intended for hunting, recreational, or competitive shooting,” even if they meet the statutory definition of armor piercing.

H.R.2710 addresses the issue of firearm and ammunition imports by removing the “sporting purpose” language and specifying that firearms and ammo which would be legal for sale and possession in the United States, are legal for importation.

The bill then takes on the problem of shotguns and large-caliber rifles which could, under strict interpretation of the National Firearms Act, be classified as “destructive devices” like mortars and artillery pieces. The current language places common items like shotguns with pistol grips, but no shoulder stock, at risk, but Bishop’s bill clearly exempts these items from NFA designation.

There will no doubt be some who will complain that this bill doesn’t go far enough in reforming, or completely repealing, the GCA, but it accomplishes a significant amount of improvement with just a few deletions and word substitutions. While the bill might not be perfect, it would represent a major step in the right direction and should enjoy broad support within the firearms community, and stiff opposition from anti-rights forces.

Although there is no serious chance that any pro-rights bill would be signed by the current president, we will be pushing for record votes on H.R.2710 in both the House and Senate, and asking presidential hopefuls where they stand on the legislation.

We encourage readers to contact their representatives to encourage them to cosponsor and push for action on H.R.2710.

You can reach your representative by going to www.House.gov, or calling the congressional switchboard at 202-224-3121.

About:
The Firearms Coalition is a loose-knit coalition of individual Second Amendment activists, clubs and civil rights organizations. Founded by Neal Knox in 1984, the organization provides support to grassroots activists in the form of education, analysis of current issues, and with a historical perspective of the gun rights movement. The Firearms Coalition is a project of Neal Knox Associates, Manassas, VA. Visit:www.FirearmsCoalition.org